First of all, it's been a LONG time since I last visited the Guinea Pig forum! For whatever reasons I simply stopped using the site, and a lot has happened since then so I'll quickly fill you in.
Before when I used to post I had my two boys Sooty (black) and Sweep (white). They were separated because they began to fight and lived happily in sight of each other able to chat and sniff each other etc.

Unfortunately, I'm really sad to say we lost sweep a few week back after a long, physically and emotionally exhausting trip at the emergency vets and £150 later (not that I'm bothered about spending the cash on my babies). It was due to lack of blood supply to his major organs and came as a massive shock to us all. Heartbroken doesn't even begin to cut it, the whole family were devastated and miss him so much every day. :-(

It was a hard decision to make however with Sooty only being 2 I didn't want him to live out the rest of his life with no other piggy for company. So that's where Leonard (long haired) comes into the picture! He's 10-12 week old and he is absolutely stunning. And quite brave as far as young skittish pigs go! The bonding between me and him is going wonderful he seems to be enjoying cuddles more and more each day.

I have introduced the boys, followed all the protocols. With a divider to begin with, then on mutual territory on the lawn, then finally in the shed where they live free range (separately, for the moment) with two of everything and only open ended hideys. As you can imagine there was lots and lots of rumbling and chasing and humping from Sooty with him being older. Luckily, no real aggression was shown though! Leonard just seems to want to follow him around and its SO lovely to see him actually play with another pig again. I currently only allow them together when I'm there with a towel on standby just in case, I could never forgive myself if anything happened to either of them.
My question really is, how long would you wait until allowing them to be left alone/live together?
At the moment, the chasing and the rumbling is quite frequent however as we speak the pigs are both just chilled out in the shed together and have been for about 5 minutes now (big achievement in the world of boar bonding haha!) I just aren't sure when is the right time to leave the divider out and let them have the full run of the place together! 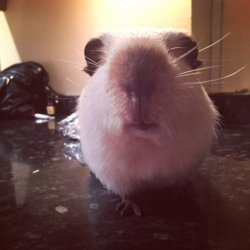 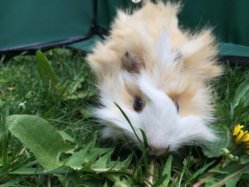 Thanks so much for any advice given, and it's great to be back!
Emma :-) x

Hi and welcome back!

I would wait and see how things are after they wake up after their nap together. Thinks are often quite wild at first when it comes to mounting. If they are still getting on, then I would take it further.

I am very sorry for your loss. You are most welcome to post a tribute to your gorgeous Sweep in our Rainbow Bridge section if you wish to. I am very sorry that he has had a rather short life. Sadly, all we can do is giving our piggies a happy life for as long as they have to live, but we can't give them a guaranteed long life. Many of the new breeds piggies are sadly just bred for looks these days, but without care to any hidden issues in the genes.

Thank you @Wiebke, I put the divider back in after posting this as I was unfortunately unable to sit and keep watch any longer however I'm going to take it out again for feeding time and see what sort of reaction I get from that. Just a tad worried that it may be stressing Leonard out all the chasing, I've not heard any squeals or anything from him yet though just squeaking as usual!

And thank you for your kind words over the loss of my Sweepy :-( I will certainly post a tribute in the Rainbow Bridge section, i'll dig out some old cute photos and post them up. I was thankful that he was in my arms cuddled up as he passed away.