Doggy Owners- Introducing A Puppy With An Older Dog.

You may or may not know that as well as my two pigs,rabbit,hamster and two tortoises I also own a dog- Molly. Molly is our little girl and first ever dog- my mum loves her as if she is a second daughter and I myself often refer to her as my sister. She is on the smaller side despite being a Springer Spaniel x terrier. Her dad was a show type English Springer spaniel and HUGE!

Molly is ten now and healthy- though she has epilepsy something that became apparent when she sadly had a seizure on Christmas Eve on year. She has a seizure roughly every four months but isn't on medication. The vet said that if we opted for medication the medication would do more harm than good and end up damaging her kidneys. She said that it was better and more humane to let her just have a fit every four months- well roughly anyway at the minute she is overdue a fit. She was supposed to have it in August but she didn't so now we are waiting. The vet said that her epilepsy wouldn't affect her predicted lifespan which is (we hope) 12-14 years. Though we do know that as she gets older she could potentially die during a seizure. Today my mum found out that Molly's mum sadly passed away -14 years old- and though she only met her once was very very upset. I must admit it did make me think of loosing our little girl- my mum will be crushed.

Anyway more to the point is- we are thinking about getting a puppy. Not to replace Molly! That's the problem we don't want to get one because we know she's getting old and just think "Oh let's get a younger model!". Molly is our little girl and any puppy that came into our house would have to know that she is our top dog. My mum would love a puppy but she thinks that Molly will feel pushed out.

We have looked after a variety of dogs of different ages and breeds while owners are away. Molly isn't an aggressive dog and most of the time she carries on like they aren't even there! Lol. The list includes labs and quite recently a 2 year old Cockapoo. I have never seen Molly so ALIVE! It was like she was 2 and Bella 10. Molly was prancing and jumping all about the place attempting to play and have a 'fight'. Bella didn't feel the same- we don't think she was socialised properly as a pup and was scared of literally everything.

Now I realise that just because she loved Bella doesn't mean she's going to love a puppy but as I said she isn't aggressive to other dogs and every time a dog had visited she hasn't seemed any different- She gets more treats haha and walks! I also look at Mo now he has Steve and wonder if perhaps Molly would benefit with another dog to live the rest of her years with. Another thing that's making me want a puppy is Molly's epilepsy- a lab we were looking after was there when she had a fit and I swear he knew beforehand! He never ventured upstairs- it's not that he wasn't allowed he just didn't. Then one day he appears next to me upstairs and a moment later Molly has her fit. He knew. And as much as it hurts me to say but I think a puppy would lessen the blow of loosing Molly...

So basically (if you survived through all of that) have any of you introduced a puppy to an older dog? Can it work? Is it unfair? Sometimes I think we over think it because she is our little girl and exaggerate how she will feel. We would never ever let her get pushed out.

Obviously we have to bare in mind a puppy will need more exercise etc. And now I'm older I can take the puppy out for extra exercise/training when Molly is tired. And if the puppy gets too rambunctious we will have a crate to say "time out". My work colleague has two older Lhaso Apsos who are 10 & 11 and she got a French bulldog puppy now 1. If he got too much she'd say "time out." And he'd get in his crate till he'd calmed down. My mum says she doesn't want the puppy to "not be a puppy". However I feel a puppy does need to know time out and having an older dog will benefit him/her.

Ps- obviously if we did get one we have took into account vet bills etc. Mum wants another spaniel.

Yes, we introduced a JRT pup to our two 9 year old dogs.

She arrived when we were 2feet in snow so she couldn’t go outside and our puppy pen hadn't arrived! The big dogs were a bit aggressive with her as she had no boundaries or respect and wouldn’t take no for an answer! We were worried about them hurting her (even by accident) so we kept her in one room and I think the big dogs resented that! But in time they became a proper little pack with the big dogs teaching her the ropes - I don’t think her recall would be as good without them enforcing it too!

It was about 6 months before the big dogs started seeing her as a pack member rather than an annoying interloper. But I think if she had been a slightly less confident puppy or if her parents & uncle had been slightly less accommodating of her roudy behaviour, it would have been easier to integrate her!

She’s an absolute treasure, they adored her (eventually!) and she helped us immeasurably with the loss of the big dogs when their times came and is still bringing joy everyday! 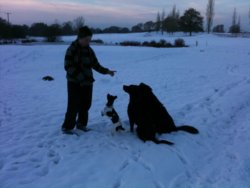 I’ve never had just one dog!
The crate idea is well worth while as pups get tired and need their sleep plus Molly will need a break from pup too!
We had a snippy dog called Sophie who objected strongly to the pups arrival and the crate was a godsend for the pup! I knew overnight that Skye, who was the pup at the time, was safe in his cage just in case Sophie wanted to bully him! Within 2 weeks she’d fully accepted him and allowed him to share her bed! It’s just a bonding process the same as with piggies!
You may find though that Molly will not take to being left behind when you want to walk the pup as she may feel she’s being left out. But remember pups only need short walks for months anyway so she’ll have time to adjus t! Don’t feel you are replacing a Molly in anyway - just spreading your love! Go for it before Molly does get too old and unable to enjoy a new arrival! Best of luck! Remember thousands of rescue dogs as well as pigs!

We introduced a 9 week old collie (Tass) to our resident 18 month old labrador (Jojo). No problems at all. Tass swiftly became boss. Jo is a very laid back tolerant dog and Tass is a little whizzer!

They are now 7 and 8 and get on very well indeed.

Good luck. Tass was a rescue from Many Tears Animal Rescue. They are great!
You must log in or register to reply here.
Top