just a fun story i thought i'd share about my newly discovered ninja of a guinea pig...

my boy oswald is very outgoing and determined so his attitude is not surprising, but his sudden agility is. just yesterday, i noticed he was shoving his face through the bars of his cage and pushing the side out so he could get out. this was an easy fix, because i just had to latch the side shut and it wouldn't push out, so i did that, but that left the back side that doesn't clip very well. so i put a stuffed animal behind it so he wouldn't be able to push it out to fit though, and just to be thorough, i put his little hut up against that side too.
fast forward to a couple minutes ago, i come upstairs, and somehow, he is out of his cage and is sitting in a little spot between the big stuffed animal and a shelf, stuck there. i was just upstairs not even 10 minutes ago, so it couldn't have been long that he was out. what is so fascinating about this is that his cage was entirely closed and nothing was suspicious except for the fact that the blanket i keep over one end of his cage was smushed down on top of his hut. as if he had perhaps been stepping on it. he's been known to get on top of his hut, but as you'll see in the pictures, it's sloped, so i wouldn't suspect he would be able to escape using it.
my theory is that he got on top of the hut, stepping on the blanket during this, somehow scrambled over the top of the cage and landed on the stuffed animal and then realised he had made a mistake when he had nowhere else to go.
just thought it was funny how far my chunky little pig will go to make a prison break.
i'll definitely be rearranging some things so he doesn't make anymore great escapes. 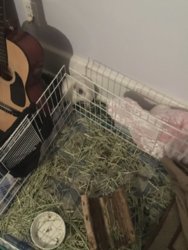 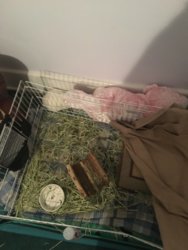 also side note, this is his cage after a day (i clean it nightly), he's a slob but i don't let him live in it

I had an escape piggy called Alfie, he lived in my shed, the shed has a cat flap which the rabbits used to free range in the garden. He used to sit by the cat flap and wait for the rabbits, as soon as they pushed the flap open with their heads, he ran between their legs and out onto the lawn! The garden is fully enclosed with plenty of hidey places so he was safe.

Red has discovered he can get his nose under the C&C grids and lift them up and escape when he is in the pen having floor time, he has now taught Brillo to do this too. I now block any cables etc with the grids and let them have free roam time instead. Luckily their cage is a large commercial one so they can't escape from their cage this way. Red is a menace, he has lots of naughty tricks and his little side kick is learning them all.

Lols. My Mochi is also known as Houdini!

In March we were decorating my daughters bedroom so moved the C&C cage into my sons room. Set it all up and draped a rug over it to give extra cover. A few hours later I came up stairs to find myself face to face with a guinea pig! We looked at each other with shock and then he ran back to his cage and I watched him get himself back in! He was clinging onto a log arch, then waking over the draped rug and jumping out! Cue rearranged cage.

A few days later piggies settled in new, custom built posh larger run, made from laminated wood with home made picket fence along the front. After finding random piggie poops around the room over a week or two we set up a camera to see what was happening! Of course it was Mochi again now using the internal struts of the picket fence to climb / scramble out and have a party, then using a little basket next to the run to climb back in when he had enough. This was pretty energetic stuff for a 6 month old piggie. I was impressed at the agility! Poor little Bubbles was sitting inside squea “come back” the whole time!

These days they come out into the C&C run while I clean them out and Mochi always tries to bite and pull on the panels to escape.

He is a Houdini through and through.

I love how different every piggy is, and how they change as they grow up. Even form day to day - sometimes they are quite friendly and other days they don’t want me to touch them at all!
You must log in or register to reply here.
Share:
Share
Top