I currently have two boars in a 4ft x 2ft cage and two sows in the same sized separate one.

A c & c is NOT practical for me as we have a large dog and he would get through one even with a lid.

What size commercial cage would be enough for four? A 140cm? or the liberta retreat (152cm long)

Also what about a double 120cm cage with ramps are these anygood? would be good for the space as well as we have limited room

This is a double corner one How many would it accomodate do you think?

this is the double one
http://www.zooplus.co.uk/shop/small_pets/hutches_cages/rabbit_cage/120_cm_cages/137393

This is a double corner one How many would it accomodate do you think?

this is the double one
http://www.zooplus.co.uk/shop/small_pets/hutches_cages/rabbit_cage/120_cm_cages/137393

Lisajazz had the corner one so might be able to give some insight to that one if she gets to see this post.

The other one you have put on is a bit of a pain to clean from what I have heard.

Are you wanting to house all four together (in one group) or all four within the same floor space (so two on top of two more?)

I have 2x Trixie Rabbit 150s (like this http://www.darwinspets.co.uk/small-animals/houses-cages/rabbit-150.html although I didn't buy from here) which are excellent cages, I think they are very similar to the Liberta ones. You would be absolutely no issues with you having other pets in the house. Or small children as they have little catches to hold the doors shut. They are really sturdy cages too. I only housed 3 in each of mine though, with an upper level. I don't think that they would be big enough for 4. I know someone who had 2x Ferplast 140cm cages which they joined together with a drainpipe piece so that her 4 can run between the two cages, but end to end it is a VERY long cage!

If you want to keep the two pairs of girls separate, you could get another 120cm cage and sit it on top of the other one. 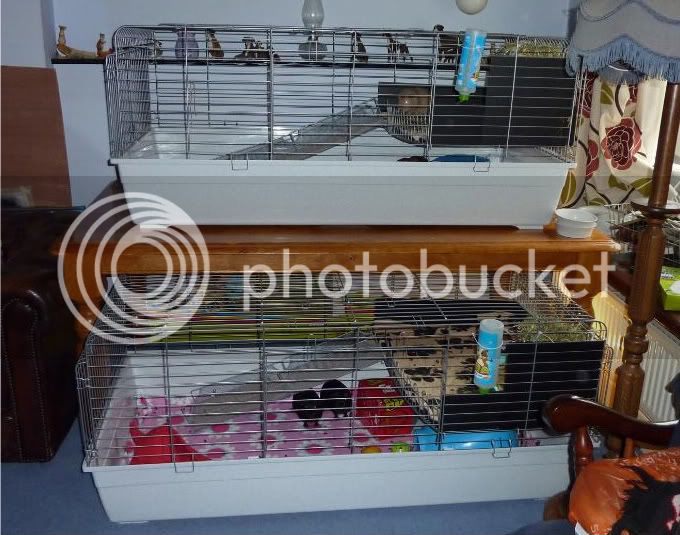 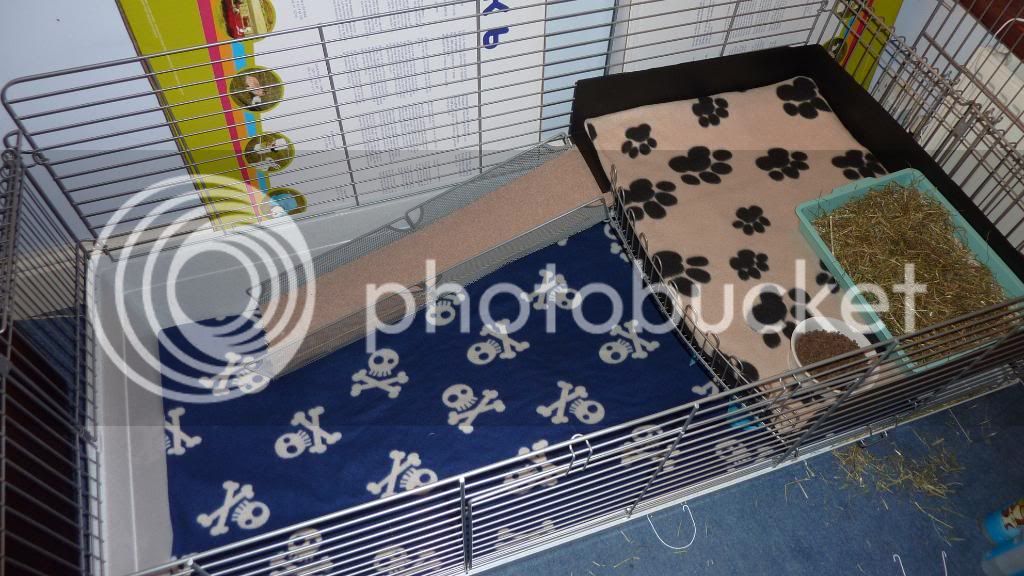 thanks for the info, yes that ounds like a good idea

With the double 120cm can you house more than two in these?

lily 74 said:
thanks for the info, yes that ounds like a good idea

With the double 120cm can you house more than two in these?
Click to expand...

Hmmmm I don't know. If they all used all of it at different times, perhaps, but if they all stayed together in the same area, then no. For example, if they wouldn't use the ramp so were all at the bottom all of the time, then it would be much too small. But if two stayed upstairs and then two downstairs for the majority of the time, this would give them more space.

Yes I see your point, hadn't thought of that.

I like the double corner one so hope to get some info on that one on how many it houses...

I am also tempted by the trixie 150 love your pics where did you get it from if you don't mind me asking?

Mine were from Jollyes who don't have an online shop so my bf drove to Milton Keynes to collected them for me. He's so good! They came with the metal balcony floor bits (although I had to remove the ramp that came with it and mae my own as the original one wasn't suitable at all!), a toilet, hay rack, food bowl and water bottle. I paid just under Â£100 each for them, where as online at the time they were anything from Â£125-Â£155 each, so driving to get the saving wasn't a problem.

They are big though so would need to have a very very big car, or a van like my bf took. The top metal bit folds down but the base is a solid molded bit of plastic.
R

KimberleysWheekers said:
For a visual image, here are my two 150's


I shouldnt even be looking at new cages:red but i really love the look of this one. I love our ferplast rabbit 140 but have always thought it would be so much better with a little shelf in. because we open the whole front and use that as a door we cant even make a shelf for it. I just wondered if its possible to leave the roof off this cage all the time as you have it in that last photo? That would be ideal!

Sorry for hijacking the thread OP!

I have one of these cages too and am delighted with it, I also purchased the stand of wheels for it which makes clean out time even easier as I can pull it out to hoover etc.

I paid just under Â£100 for the cage from my local garden centre and like KW I also altered the ramp area. The gang have settled really well, I currently have 4 elderly pigs in it which I know is probably 1 too many really, but they get lots of floor time and due to their age (around 5 1/2 to 6 1/2) they tend to spend most of the day snoozing and eating, not much running around is done any more.

I have previously had various C&C set ups but because we now have a young cat and a cocker spaniel I didn't feel the C&Cs were 100% safe.

Ryo_the_Rat said:
I just wondered if its possible to leave the roof off this cage all the time as you have it in that last photo? That would be ideal!
Click to expand...

You could leave the top off, but the sides wouldn't be as sturdy; I'll try to explain! The plastic base has little notches on it so that the metal sides side in place, and then there are metal clip type things which hook on to the metal bit then clip onto the plastic bit to hold it in place. The sides are all joined together but concertina to make it smaller to package. The top bit sort of holds the edges out, but so long as you didn't have young children or a dog etc which would push at the bars, leaving the roof off wouldn't be an issue I don't think.

Caviesgalore said:
I have one of these cages too and am delighted with it, I also purchased the stand of wheels for it which makes clean out time even easier as I can pull it out to hoover etc.

I have previously had various C&C set ups but because we now have a young cat and a cocker spaniel I didn't feel the C&Cs were 100% safe.
Click to expand...

I had the trolley bit for the 120 version of this cage which I have now sold. That was brilliant and was the reason why I opted for the same cage again, but bigger. The only reason I didn't get the trolleys this time was because I had two of them and wanted them on top of each other to save floor space. I loved being able to pull the cage out of the way and give the floor a good hoover!