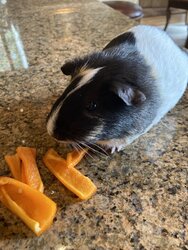 How much does she weigh? You should weigh weekly to look out for any signs of weight loss. Normal kitchen scales will do the job

Has a vet said she is skinny?
Have you checked her heft?
How old is she?

If a piggy is healthy and there is no medical reason behind any weight problems, then they will gain weight in their own time with a good hay based diet, one cup of veg per day and one tablespoon of pellets per day.
Piggies need to be weighed weekly but their weight isn’t a good indicator of their condition - each piggy has its own weight and what is good for one isn’t good for another so checking their heft is the best gauge for the individual piggy

Have a read of this
Weight - Monitoring and Management

Your baby looks perfectly normal to me but you need to weigh your guinea pigs once weekly for all their life as a crucial part of life long health monitoring in combination with a once weekly body check over.
You measure around the ribcage whether a guinea pig is the right weight for its current size (we call that the 'heft' but you can also say you are feeling for the BMI). Keep in mind that the young fast growing babies are always a touch more bony because all their energy goes into growth and not into fat reserves. That is the reason why you won't find overweight babies - they are larger or smaller.

Please take the time to read these two guides; they are important to make sure that you can spot developing problems early on and know when you need to step in. You may want to bookmark them:
Weight - Monitoring and Management
Guinea pig body quirks - What is normal and what not?
Early Signs Of Illness

Are all these pepper slices for you baby? One slice a day is enough! Please keep in mind that a veg mix that is not too high in sugar (fruit!) and rich veg (carrots are like eating a bar of chocolate) should only make about 15% of what a piggy eats in a day. 1 tablespoon of pellets per day (a very young baby can have two) should make another 5% and the rest should be unlimited hay and fresh grass, if dog pee free grass is available. Keep in mind that green growing grass is high in vitamin C and that grass hay still has got some, too. Because guinea pigs have evolved on eating fresh and dry grass (hay) with a little forage mixed in, they have never had the need to make their own vitamin C in the first place. The closer to their natural ideal diet to keep what you feed, the better. It can add 1-2 years to an average healthy life span and take it from the lower end to the upper and beyond.
Long Term Balanced General And Special Needs Guinea Pig Diets

Oreo and Chestnut the piggies said:
I’ve never actually weighed her but the vet said she’s Underweight I don’t have the correct thing to weigh her
Click to expand...

Cheap kitchen scales from a supermarket will do the trick. You do not need perfect absolute body weight in order to calculate correct medical dosages like a vet; what you monitor at home is a change in weight.

PS: any baby on a good diet has plenty of time to catch up before they are 15 months old and latest before 24 months. They will simply continue growing for a little longer while for other youngsters the fast growing phase will stop sooner. Just concentrate on a good diet and weekly monitoring and your baby will reach their genetically determined optimal weight and size without going overweight or being underweight. There is no such thing as an 'average weight' unless you want tell a full half of all piggy owners that their piggy is to fat (even if they are simply large) or underweight when they are actually perfectly fine for their small frame.
That is why feeling for the heft is important - it gives you an idea whether the weight on the scales is in the right ball park for that specific piggy or not.

Tiny Helygen was on the chunky for her, being in spitting distance of 800g at 3 years of age while her husband Pioden was actually skinny at 1400g and would not have been considered overweight at 1600-1700g! He is my largest piggy ever (even though his weight is gradually coming off now that he is an old man at 7 years of age).
But every vet going just by the literature would have told you that Helygen was underweight and Pioden overweight.

She’s almost a year old. But if you don’t think she’s overweight that’s very good thank you guys this forum has help me so much

Oreo and Chestnut the piggies said:
She’s almost a year old. But if you don’t think she’s overweight that’s very good thank you guys this forum has help me so much
Click to expand...

She's definitely NOT looking overweight but it would be VERY good if you learned to check that for yourself as we can only go by guess but not by hands-on results (feel around the ribcage!) and without any idea of her weight.

I would strongly recommend to invest in kitchen scales; they can make all the difference in a life or death emergency.
You must log in or register to reply here.
Top