Three weeks today since I lost my baby so I suppose I’ve got to say a bit of a goodbye to my best piggle ever. Sorry so long, she had a jam-packed 7 and a half years!

My little, extra special girl was adopted in 2013 as a slightly dysfunctional 7 week old baba that had been taken away from her mum (with her two brothers) at 3 weeks old so was desperate for attention (from pig and human!) She joined my Sheepy the alpaca after he lost his best mate Reggie and was also in dire need of a pal!
They got on brilliantly but Sheep sadly got quite poorly and left for the bridge so yet again was a dysfunctional little lady desperate for attention!
Then she met her Rupert! Love at first sight and sniff!

They really were the sweetest couple, apart from every few months when she’d have a rather stroppy season and poor Poopy Bear couldn’t do anything right! But they had a loved up and incredibly happy 6 years together!

In that time she had a mammary gland cyst so lost a nipple, then her hearing and wheek went bless her, didn’t stop her feisty and confident self though, that was just her! A Wonder-Pig as I liked to call her!

She lost Rupert last May and was utterly miserable, stopped eating and was again in desperate need of a new friend! Which is when loopy Luigi moved in July!

After a very long bonding and both being dominant pigs, he finally realised she was the boss and that was that! They then got on brilliantly, he’d run to her for a face groom and reassurance and they got on great, not quite a Rupert love though of course!
She had to have her eye removed after an injury (probably his nail!

) that October, she was by then not far off 7yrs old, she coped amazingly!

In January she was joined by the first sow she’d been around since her mum, Aliona.

Again she coped so well even though this new lady was a stroppy madam and targeted the little old boss! Thankfully Luigi was smitten and her bodyguard (most of the time!) so she had a bit of back up, but that was just her nature, a little fighter! But it soon calmed down and she lived her last 8 months in her little trio, as the boss of course!

Sadly we found out she had kidney problems and it was palliative care for my special one in June, so I hope she had a great couple of months until I had to help her to the bridge.

We were so close, she was a massive part of my life and such a cuddly, kissy and licky little lady! (She got me more than I got her, I didn’t lick nostrils either eh Jess

She really was one of a kind and I loved her so much. But she’s back with her soulmate Rupert

3 hubbies but he was definitely the one!

She’s massively missed and will be forever, she was such a lovely, happy, wonky little lady! Really wish I could have her outlook on life! She was blooming amazing 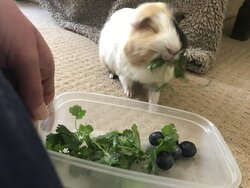 What a beautiful tribute to Jessie. Thank you for sharing her story. It is clearly evident how much love you have for your piggies and how well you have cared for them all. Be kind to yourself and try find comfort that Jess had a long and happy life x

A beautiful tribute to a beautiful girl. Sending you hugs @alpacasqueak .
Popcorn free over the bridge with Rupert sweet Jess.

What a wonderful tribute to what sounds like a vivacious piggy. She sounds amazing, and so does the relationship you had. I’m sure she felt loved all the way through the time she was with you. Hope she’s popcorning and eating all she can with Rupert by her side

Aw, Becci what a lovely tribute to Jess, your very special little lady x Sending you big hugs, it’s been a sad time for you loosing her, but she will have passed over the bridge knowing just how much you loved her. Jess is with Rupert Poopy Bear now, they are back together watching over you x

Such a gorgeous girl and such a lovely tribute for her. Sending you a big hug Becci

What a beautiful tribute to your special girl. I'm so glad I had the privilege to meet the gorgeous lady, she was such a lovely Piggie.

Aw what a beautiful tribute to your special girl. Sleep tight Jess xx

Your tribute to Jess has brought tears to my eyes. All pigs are special, but some are just that extra bit special. She will stay in your heart forever.

What a lovely tribute. I loved hearing jess's story through jesses thread and getting to know her and her friends. it's clear she meant a lot to you and the bond you have makes her a very special pig indeed.

x
It’s hard to put it into words how much she meant to me and still so strange she’s not here being her lovely self after all these years. Miss our cuddles!
She had such a rubbish start living alone at 3 weeks old and then having 3 husboars in her life but she never let anything faze her, just had such a good outlook of the world (even if she couldn’t hear it and could only half see it at the end!)! And such a beautiful girl

So sorry for your loss

That is a beautiful tribute... so nice to hear about all her fellas along the way... rest in peace little Jess xx

What a beautiful tribute to your special girl, and what a long and happy life she had, you did so much for her supporting her through bereavement and illness and keeping her happy right up until it was time to say goodbye! Sleep tight little Jess, reunited with your old pals over the rainbow bridge x
Hugs for you @alpacasqueak and Luigi and Aliona x

Thanks so much everyone

Thanks for all the hugs too, most definitely need them today! x

Hope I did everything I could to make her happy @PigglePuggle and made up for her crappy start in life! Think I’ve got to thank my Rupert the most though, he helped her little wonky brain so much to understand the confusing piggy world bless him! x

What a lovely tribute to a special girl.
It brought tears to my eyes.
I hope you are still being gentle with yourself
You must log in or register to reply here.
Top