Hi guys, this is my first ever post and I’m sick with worry about my piggy Scott, chronically ill myself and sleep deprived so please be kind.

Scottie started showing symptoms 3 days ago. Unfortunately we’ve not noticed his weight loss which I really feel bad about. His eyes are small and as if shrunken/sunken, his fur stands out. We took him immediately to the vets. They examined him from head to toe. Teeth seem fine, even back teeth, heart and lungs seem fine too. Liver possibly enlarged but she couldn’t be certain as she doesn’t have a base for compassion. They ruled out infection and decided not to give antibiotics (a team of vets examined him). Stomach is quieter but still makes normal noises but not much food in there (When we took him he was eating normally more of less, poop was smaller/shorter and dryer). His temperature was a little bit low. He was definitely dehydrated. He weighted 750 grams. They gave him fluids and critical care food. Kept him for the day and did an ultrasound scan that showed fluid around the abdomen which they explained is common with pigs who’ve lost weight and goes away by itself if the underlying problem is resolved. They didn’t find anything else. Discussed the risk of blood tests and were not inclined to take blood and so were we after hearing about the danger. They told us to feed him critical care with a syringe every hour which made his poop stick together and eventually very soft and shapeless. They said his temperature went back to normal and that he’s comfortable and seems almost normal. We brought him home yesterday evening (apologies if it’s a bit confusing, trying to go chronologically). He eats veggies very eagerly, doesn’t drink from the bottle anymore or eat pallets unless fed by hand and only few at a time. The vets checked on him today said he gets enough water from the food. Most worried because he doesn’t really move or lie down or curl up like normal. Moves only if you hand him food or when on the floor with his brother. He follows him but not too far away and seems to not walk properly, as if stumbles and his body is too low to the ground. His face still doesn’t look normal and eyes are maybe tiny bit bigger but still much smaller than his brother. We weighted him this evening and now he’s about 840 grams. I wonder is this real weight or just all the food in his belly because it’s almost 100 grams more now? He still nibbles on hay. We started spacing out the liquid food because of his poop and because we started running out of it. I’m so scared he won’t make it. The vets can’t give us a diagnose which is what worries me and said that besides giving him more critical care food there isn’t more they can do. Please do you have any advise of suggestion what can be casing this? His eyes besides small are normal, his nose is fine. He’s never been sick before. He’s 4 years and 2 months old. Do you think it’ll take time to get better of pigs either get better quick or die? I can’t lose him... we’ve not slept at all for nearly 3 days. Besides nursing him I’m just scared to fall asleep and constantly check on him. Does he seem very ill to you? We also keep me warm. They’re indoor pigs but I took him to our bedroom, heating is on 24hrs now and he had a heath pad. Apologies for the long post, just wanted to give you as much information as possible. Last question- someone suggested giving him metatone tonic. Has anybody used it before and is it safe?

Please help if you can. I’d lose a limb if I can bring him back to normal. Thank you in advance x 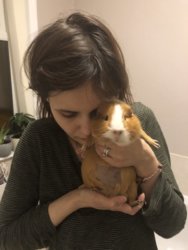 I don't know much but hopefully @Wiebke can help.

I’m no expert, but my immediate thought was that I was surprised your vets haven’t given him any pain relief. Loxicom is an anti-inflammatory as well as a painkiller, and although long-term use can cause kidney problems, you have an acute problem and the vets presumably didn’t see anything on the ultrasound to make them suspect kidney damage.

A guinea pig in pain is never going to eat or drink as normal, if you can make him feel more comfortable then it can help him get stronger while you figure out what’s going on.
D

I recommend trying a new vet. If you check the vet locator at the top of the page then you should find a recommended vet in your area.

I agree that he needs pain relief, Metacam and Loxicom are the same medicine and would help him feel a bit better. His hair standing on end is a symptom of pain.

I can't diagnose as I'm not a vet and unable to see a true problem without seeing the pig but a guess would be bloat or gut issues. Gas/fluid in the abdomen happens with bloat. It's also very painful so pigs are less likely to move around. They also find it difficult to lie down and get comfortable.

I can only suggest taking him to a different vet unfortunately. I hope you find out what is wrong and he gets better soon.

All I can suggest is a new vet. If you type in your post code in the vet locator in the green bar. It will find you a cavy savvy vet. Your present vet really doesn't seem to have a clue. He needs to see someone who can help him

Maybe not the best time, But hi & Welcome to our friendly forum.

I think that you should pehaps go to see another vet. Here is the link to the recommended Vet locator Guinea Pig Rescue Centre Locator
Shrunken eyes, hair standing up, not moving and not eating are all signs of pain as well as illness and your piggy needs some pain relief. Sending you all healing vibes.

I can’t add to the advice given but wanted to say welcome to the forum.
This is the best place to find support for yourself at this anxious time.
Holding you and Scott in my thoughts
You must log in or register to reply here.
Top