Hi everyone! These photos aren't the best, but they bring such happiness to our family :-) They show Jessie and Rayla, who less than a week ago were introduced for seven hours, and showed such aggression towards each other that we were scared there would be bloodshed.
They are now choosing to sleep very close to each other, and seem completely calm with each other

What is even better than this, is that one of the reasons we decided to look for another rescue pair to bond with our original pair, was that Jessie appeared to often be upset by her older friend's moods towards her. She often tried to sleep near her friend, but it wasn't welcomed. Now though, despite last week's upset when bonding, she appears to now have a close friend

It's so lovely :-)
The other two also seem very happy since the herd was created too. The other young girls seems really happy, and is sleeping next to any of the other three without being told off by them, and the oldest girl is calm and happy, usually found sleeping in one of the litter trays on top of a load of hay, munching on bits in-between napping. :-) It's all so lovely to watch :-) 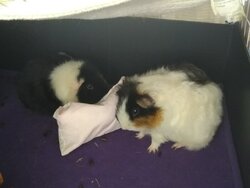 Oh! I love a story with a happy ending

the pictures are lovely and it’s the wonderful world of guinea pigs - I’m very happy for you and your family !

So lovely to see its all working out!
I have found that in a herd the more difficult characters (I'm thinking of our Mad Piggle) get diluted down a bit, and the less social piggies get more friendship options- great to see your piggies so chilled out and friendly

So happy to see this.
Gorgeous piggies
You must log in or register to reply here.
Top