I have two boys aged approximately 7 months. Chocolate has always been a bit reluctant to be held by us but I make sure that we take him out daily for cuddles to make sure he is used to being held. He has always nibbled at us but lately we are getting full on bites that are becoming more and more painful! My two children and even my hubby are now very reluctant to hold him because he bites no matter if they are stroking him or just have him on their laps - he will actually seek out flesh or something to bite!

Is there anything we can do to discourage the biting? We have not shouted at him or tapped him on the nose as I don't agree with doing that, we normally just ignore what he has done and put him back in his cage.

He is the bigger boy at just over a kilo and kind of bullies his brother as well by sitting on his head and occasionally scuffling with him - yet if we take Scruffy out first you would think that the world has ended with the wheeks that Chocolate does until they are reunited! Scruffy was very ill over Christmas so is just getting his weight back up to speed but at 800g is still 200g shy of Chocolate so still prone to bullying!

Do you think getting Chocolate neutered would stop his biting/anger issues? 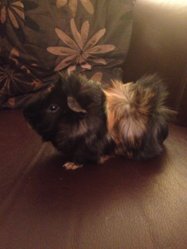 This is our very handsome dude (who funnily enough matches our colour scheme in the family room pmsl!)

Getting him neutered won't change his behaviour.

I'm not expert on this, but I'm thinking that because you put him back when he bites he's almost getting his way? He's learnt that biting = no more being held and being put back. Which is probably what he wants. Maybe try and keep him out a little longer after he bites, as long as it isn't too stressful for you and him of course.

Some piggies just really don't like cuddles full stop.
How long do you usually hold him for?

ayemee said:
Getting him neutered won't change his behaviour.

I'm not expert on this, but I'm thinking that because you put him back when he bites he's almost getting his way? He's learnt that biting = no more being held and being put back. Which is probably what he wants. Maybe try and keep him out a little longer after he bites, as long as it isn't too stressful for you and him of course.
Click to expand...

I agree with this. Putting him back is encouraging him to do the biting more because he knows what result he will get.

We hold him for 5-10 minutes at most. Scruffy on the other hand would happily sit on us all night!

I think maybe you might be right with him getting his own way! Will defo try keeping him out after he has bitten x

I agree about the biting to be put back in his cage. How long have you had them for by the way? Because one of my boys, Martin, was a biter. We got him a year ago (to the day

it's their adoption day today hehe). He was the most skittish of the two (still is), absolutely HATED being held even for a minute, would literally SCREAM with fear the first couple of times we cleaned him and cut his nails etc. His bites were very hard and deep and it was clear that it wasn't because he was angry or annoyed ,he was just terrified! Before they lived with us they were bought as pets for children who got bored with them quickly and also didn't like Martin because he was a biter, so then they went into rescue. Our theory is that he was not handled properly by the children and he soon learnt that if he bit them they would quickly put him back down. He had learnt this behaviour and had it reinforced before he met us and it was very difficult to break - but it CAN be broken.

Literally improvements are still being made, but one year on I can have him on my lap for a good 10 minutes on good days and when he wants to go back to his cage really badly he will just lick my finger - the longer I ignore him the more persistently he licks and if he gets very frustrated he will do gentle nibbles. But he never bites us anymore to put him back in those situations. We do still get the occasional bite when he's in situations for awhile that he gets stressed out over so for example we only just learnt about extracting their penis and cleaning it and it was a new situation for him and he was very stressed and I got a nasty litle bite from him but even that wasn't as bad as some of the others and was towards the end of the situation.

Progress can be slow but in your case your pig hasn't been like this for about the first year of his life like mine was when I got him so I'm sure you can turn his behaviour around quicker. You just have to be persistent. Do not put him down when he bites you. This might mean at first just holding him in a way that means he can't bite you for a bit before you put him down. Try holding him for very short bursts first, literally 1-2 minutes and building up. I imagine he bites more the longer you hold him? Also if he can change the way he communicates with you reward him so like Martin learned to lick me lots to ask to be put down and I have reinforced that by putting him down when he does because that's much preferable for both of us than he was biting.

Good luck and remember it's not because he doesn't like you or is angry he's just frightened, some pigs are very shy and take a long time to come out of their shell and will always just naturally not be cuddly and be more skittish than others. They still love you in their own little ways - I have just taught this pig that still sometimes growls at the sound of my voice or runs to hide in a corner when I come close out of the blue how to go up on his hind legs on command, something I thought would be impossible! Pigs are amazing animals.

Have you tried some of the tips in this thread here? I have some piggies that will bite when being picked up and carried around, but they behave while being cuddled. my first adult piggy was a biter, but with patience she would only tweak and only when she had good reason for a complaint (like being treated with foul tasting baytril). I have since started to establish my dominance in piggy using piggy language; while not all piggies are happy being cuddled, the painful tweaking has gone down.
https://www.theguineapigforum.co.uk/threads/how-to-understand-guinea-pig-instincts-and-speak-piggy-body-language.117031/

PS: if your boy's aim is actually to be put back in the cage, then your behaviour is encouraging him.

Thank you for replying and for all advice. I took him out today and held hi close so he couldn't bite - he was a very good boy and seemed to enjoy his cuddle better. I'm still quite new to this and just beginning to learn their wee characters. We've had them now since mid-October so still relatively new to each other I suppose although they know when I come into the room as they wheek madly and also wheek loudly when they hear the fridge door open or a plastic bag being opened!

I have spent a lot of time reading up about piggies so that I can give them the best life possible with us just wasn't sure about the biting. Here's hoping we can break his habit

Just wanted to say as well this site is an absolute godsend! Everyone is so helpful and everything I need to know to help my piggies is here - fabulous! I would be lost without this site x