poor Nibbles has got something wrong near her eye. I suspect fungal due to the hair loss starting there but there is some blood in a couple of places and I can't quite work out if it's a scratch or a wound/cut. Booking vets now but would be interested in your views. Have previous experience treating ringworm but a reminder on what to ask the vet for would be great please. 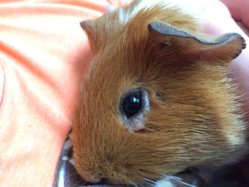 It rather looks like fungal to me. Please see a vet and take precautions in case it is ringworm.
https://www.theguineapigforum.co.uk/threads/ringworm-hygiene-and-pictures.115402/

Agree it looks like fungal. I would ask the vet for Imaverol and/or Itrafungol but that is covered in Wiebke's guide.

Thanks both. Vet says not fungal which surprised me as the hair loss looks so like it.

He thinks she's done it to herself. He put something in her eye, turned the lights out and shone a light in her eye which showed up a scratch on her eyeball - I could see it when he showed me.

He's prescribed fucithalmic eye drops twice a day and asked us to bring her back in a week.

I'd checked the other 3 she lives with and as none of them were showing any signs I decided not to take any of them with her in the pet carrier. Silly mistake - she was all limp at the vets. I've never seen her like that. I must have stressed her by taking her on her own. Felt bad but won't ever do that again. As soon as we got her home and back with the others she perked straight back up.

My Sophie does exactly the same thing at the vets even if Tim goes with her, frightens the life out of us.

That was a diagnosis I didn't expect. Hope the drops help.

@helen105281 @Wiebke when you get a moment but not urgent I'd appreciate your views again - this photo taken just now.

To me it looks slightly worse than it did before. I think she must have scratched again. We are due back to vets on Friday anyway. I think I will try and make the appointment sooner if it gets any worse again. 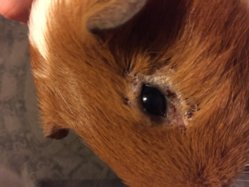 Yes, it very much looks like fungal to me. Please see a vet tomorrow.

Please read this thread here. it contains lots of tips on how to best deal with an outbreak of fungal to prevent it from spreading. It also gives you an idea how a fungal infection runs its due course, so you know what to brace yourself for.

However you need to get rid of the fungal surrounding the eye. Given its location (and the already potentially damaged eyeball) I would suggest imaverol dip (and additional application with the same to the infected areas with a cotton bud) would be more appropriate than any topical creams etc.YOu just need to get your vet to Ok the treatment - you can order imaverol off the internet.

Also you need to adopt good hygiene measures...investing in some F10SC disinfectant wiuldn't go amiss as per the link in Wiebke's post above.
x

Thanks all. I agree it looks fungal but surprised the vet didn't think so when I specifically queried it with him last week. He's been pretty good so far with everything I've taken to him.

I have all the kit for fungal (although will need new imaverol because of the length of time passed) as had an outbreak of fungal back in August in the same group.

I have found the Anigene lavender antifungal disinfectant quite nice and actually use that every week when I do a full cage clean (so you'd think I'd be fairly well protected against an outbreak!). It's slightly cheaper than F10 but they don't do a hand gel so I have the F10 hand gel.

None of the others showing any signs of fungal either but I appreciatewe are still within the incubation period.
P

The available data sheet for Anigene does not demonstrate effectveness against ringworm fungal spores....unlike F10
x

That's interesting thanks. I'm sure I checked but must have got it wrong. I think I assumed anti fungal covered all types of fungal. Really appreciate you telling me. X

@TheAurora @Goth Mummy Good news - vet says the ulcer on her eye has cleared up and I've finally persuaded him it must be fungal so I've now got itrafungol and agreement to use imaverol dip too. I feel we are now on the road to sorting this out at last!

That is really good news. It is also a demonstration of how attentive and dedicated a piggy owner you are that you have persisted with your gut feeling about the diagnosis and worked with your vet to try an alternative treatment. My vet told me that she always takes guinea pig owner's opinions very seriously because those who can be bothered to take their piggies to the vet are often dedicated.

Agree with Goth Mummy, great that your vet was receptive to your ideas and she is now on the right treatment.

Aw thanks everyone. And thanks for all your help and support too x