So in the last 3 months I have heard my guineas pigs chirping on 2 occasions and was wondering what you guys thought about the meaning of this noise! By chirping I mean the bird like repetitive chirp that is loud and distinctive.

The first time was the very first night I got my girls home: they had been through a long journey and completely different surroundings. One of them was chirping at quite a slow frequency (maybe once per second) all night long! It continued off and on- every time it woke me up and I moved enough to disturb them all would go quiet for 30mins or so until it started up again.

The second time was yesterday evening. They had their floor time cut short as my dad started painting and I didn't want them to inhale the fumes. They were back in their cage down the hall with their dinner and about an hour later I heard the chirping. This time it was VERY loud (my mum heard it through the house and I heard it over loud music on the TV in a different room!) and much faster frequency maybe 2 per second (my dad thought it was a car alarm!) and they stopped when I went into my room where the cage is. Unfortunately I didn't catch who was doing it, so I've no idea if it was the same or different pig to before.

Since both occasions were different situations and the noise was slightly different I wondered if they meant different things. Perhaps the first time they were scared and worried? Maybe the second time they wanted attention after not getting a good run around? Were they singing along to the tv music?! Or is it associated with when they come on heat?

I'm fascinated to hear any other ideas! I'm also going to try my hardest to video them doing it if it occurs again!

Well, if you could figure out for sure what chirping means, you have solved the biggest piggy mystery! So far, none of the currently circulating explanations is satisfying. The biggest problem is that chirping is pretty rare and that it is very tricky to document the situational context. You can go years without a chirper. Many piggies will also only chirp when no human is near, or stop as soon as you come closer.

I, too, believe that there are different chirpings and that it is much more complex than initially assumed. One variety seems to express a warning or an upset, as can be witnessed by the reaction of the other guinea pigs within listening range. At other times, the other piggies will listen attentively, but are not frightened.

I've heard it two or three times from different pigs, but have never been able to pin down any rhyme or reason to when/why it occurs. I do know that when one was chirping, the other pig was listening very attentively. It must mean something to them, but they haven't let the humans know what it means yet! There isn't supposed to be a well-understood reason for this sound, so it's interesting to speculate!

I have one chirper! Only heard her a few times in 4 years.

I have a very frequent chirper, Pixel - she's been doing it nearly every night for quite a few weeks now, even when we're in the room. In the middle of a particularly lengthy session, Widget (who is my resident Worried Pig and doesn't usually raise her voice above a chunter) joined in too - really weird!

My Pirate does it every so often. Times I've heard it have been: after Strawberry has been in season and been bothering her for along time with rumbling, mounting etc., and once when I left them having floor time for longer than I usually do, and once when I couldn't see anything amiss at all. I do notice that when she makes the noise, her sides heave in and out like a human's might if they were crying uncontrollably, and the way she does it, it will start with a few quiet chirps and then build. I've also seen/heard her do a couple of quiet 'chirplets' on her own, with sides heaving in and out, but then not take it any further.

Nala has chirped once that I am aware of. It was very early in the morning, about 5 or 5.30am and it was so loud it woke me up. She appeared to be in a trance for some minutes before she stopped and went back to sleep. Katie just sat and watched her like she was watching TV. Like yours it was very fast, I first thought it was the hamster on her wheel. I would love to know what it means x

One of my boys has chirped twice this week and it's the first time he has started it. The first time I heard him doing it I was not quite sure for the reason behind it because I didn't witness the whole thing from start to finish but he did it again today and this time I saw the whole thing. It's winter in Aus at the moment and so we have a lot of overgrown grass at the moment. I picked up a big bunch of it and popped it on the floor for them outside but in the patio area and all three of my other pigs ran straight for it. Hubert stayed where he was which was deep in the patio where it is enclosed. He really did not want to go out to the spot where the grass and the other piggies were. And then he started breathing very heavy and a raspy/crocky whispering sound started coming out. At first I thought he was struggling to wheek. But after doing that for a little while he began the loud chirping noise which he did for several minutes. And then from there he went back to the whisper noise. Through out the whole thing I got the impression he was distressed about something. There is a new cat in our neighborhood which I've spotted in our backyard in the evenings so perhaps it might have left it's scent out there? Anyways I let him sit on the couch with me for a while and he calmed down. I think guineas might have differing reasons for the chirping but I am pretty confident that my little man's session was because he was distressed. I managed to film parts of it too so I will upload that so you can see what I mean. He is doing fine now and is back to acting himself.

I've had three chirpers - all of whom did this from around 8 months to a year I think, it's hard to remember for sure, but they all seemed hormonal at the time.... Sunrise did this quite a few times around that age. She wasn't the dominant pig but is now. Cloud, and underpig from the start, having just chirped for the first time she then almost immediately after stopping tried to hump the other pigs. I never saw her hump afterwards, but she occasionally chirped. Penny does and almost-chirp from time to time, and at a similar time of her first humping session, and the only humping session I have seen from her too. She is also an under-pig. All of this could be coincidence, but it could be worth noting the ages of the pigs when they first chirp

i just made a thread about this because mollie chirped last night. the first time she has, and my third piggy out of five to chirp! no idea why. it is fascinating but a bit un-nerving.

biscandmatt said:
i just made a thread about this because mollie chirped last night. the first time she has, and my third piggy out of five to chirp! no idea why. it is fascinating but a bit un-nerving.
Click to expand...

Oh I didn't see that one, I'll search for it now.

Porkie or Pie have chirped once or twice in the past. I'm not sure which one as it has always been dark but Porkie the the loud one. She also tries to be the OverPig but Pie just ignores her rumblestrutting and does what she wants anyway (usually rolls on to her side yawning).

Last night some time between midnight and 1am I was woken by what I thought was the smoke alarm. It was one of the pigs who was chirping loudly, at the same volume, in the same rhythme and for many minutes. I got up to check and as soon as I approached the cage the sound stopped. As it was too dark to see who it was I went back to bed. It happened again an hour or so later.

Checking out the internet people say that a) it means they are contented, b)they are distressed, c) they are sad and lonely.

Basically, I am none the wiser.

Porkie and Pie are 2 1/2 year old girls. They are indoor pigs living in a 6x2 C&C with loads of places to hide, eat better veg than I do, get loads of floor time (where they are always content enough to roll over and fall asleep). So they have no reason to be distressed that I can think of. As it says on one forum post I have just read. "who knows what goes on inside their furry brains." 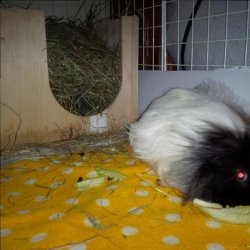 Pie is the ginger one. Porkie is the one scarpering.

This summer, I have heard Inka chirping twice; the first time during the day when she was inside in the pig-room, and the second when she was out on the grass in the run with Maya and Bonnie. Each time, as far as I am aware, there was nothing around to scare or worry them at all. I think it's like Stone Henge; just put there to bother the hell out of us!

Hi there, l knonw people have all sorts of theries as to what the guiniea pig song (cheep cheeping ) is all about , l have been triying to undestand why they do it for a long time

l have heard it to many times in differing cucomstances that personaly l beleve they do it simply because they can.

If you have ever noticed the start of the song , ? They seem to start of as a low wheeking sound and they seem to realise they are making
This sound , and they then begin to work on it, if left alone it can go from the single montone cheep into somthing quite melodeus.

The only time l have ever been temted to think otherwise was when l intreduced a hamafredite (both sex pig) and one of my guys semed desturbed
And started the song.
To my uter amazment the hamafrodite leaped out of my arm,s and whent for the singing pig with teeth fully exposed

and if the hermafridite had not , Been restrained , there would have been a fight .

Dont let me scare you , this hemafredite was one strange piggy

Wow what an unusual circumstance @gizzy. Sounds like a very interesting piggy you had there x

Yup he.she was a stange pig, he had all the boar bits, but he would presnt himself to other pigs as a sow .
That is to say he would present his back end like a sow that in season often dos,
My vet examined him and all the breading organs were in place , and he concluded
This pig is an hemafrodite

If l remember corectly , vet serjersted l call him Lala
A song from the 70s about a tranvestite