Help! May have screwed up bonding sows.

Cookie. Female, probably 4 years old. Short haired calico. Was bonded to her sister Coco, who died about two years ago. Cookie spent the next year in a loud classroom, alone. My fiancee and I liberated her from the classroom and she is living her best life now. Cookie and I are very connected, and we have a running joke in our house that she and I are a bonded pair.

Pepper. Female, about 10 months old. Short haired calico. We got her because everything I researched said that guinea pigs shouldn't be alone, and a human is not an appropriate substitute.

(Pepper is on the right)

Truffle. Female, about 5 months old. Abyssinian. Absolutely docile, and the sweetest girl. She is larger than Cookie, despite being years younger. 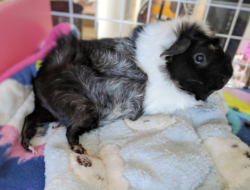 In February we got Pepper so Cookie would not be lonely. Introductions were a little more rough than we were expecting, though there was no fighting or biting. Cookie seemed to tolerate Pepper, but definitely did not bond with her in the way we were hoping.

The following months we observed very little change in their behaviors. Pepper is a happy pig, but Cookie bullied her from time to time. She never bit, and Pepper never made a claim for dominance. But Cookie would rumblestrut and steal Pepper's food. Perhaps anthropomorphizing a bit, but this made us very sad for Pepper. We decided to consider a third piggie who would bond with Pepper, and who was much closer to her age. In this time, Pepper became a bit of a drama queen, squealing when Cookie even approached her.

3 weeks ago the piggies endured two days of driving as we moved from NYC to Madison, WI. I was able to rebuild their 2 x 3.5 C&C cage a couple days after the move, and they now have their own room.

Yesterday I expanded the cage to 2 x 5.5. Then we got a call to come pick up Truffle. We introduced them in a neutral playpen that we divided in half; Cookie & Pepper in one half, and Truffle in the other. Everyone got their own food dish. With the barrier up, they could see each other and were curious. But when we lifted it, after about an hour, things got bad. Cookie, who had never bit or even raised her fur at Pepper, started chasing Truffle and Pepper around. Even docile Pepper started going on the attack, which was scary. I've read up on this, and knew that much of what we were seeing was Cookie asserting dominance, and the three of them sorting that out. So I let it happen. But Cookie yanked out a chunk of Truffle's fur. We later found blood on Truffle, though we're not sure if the missing fur is related. (Had I seen the blood while they were together in the playpen, I would have separated them immediately.)

We bathed them together. It did not help.

I had no idea what to do, but I did not want to keep them in the same space. So I divided their cage, with Cookie & Pepper in one side, and Truffle in the other. That was not suitable for Cookie, who cornered Pepper and was clearly still angry. So overnight, Cookie flew solo and Pepper & Truffle were together. This is the setup that remains now.

I am aware that sometimes piggies get stressed when their space is limited. It's important to note that the three of them have still not yet been in the same (divider-less) 5.5 x 2 cage.

Today I took Cookie out for a few hours while I was doing work. Out of her cage and with me, she was in excellent spirits and our rapport was there like nothing had changed. Pepper and Truffle fought a little this morning, with Pepper getting a small chunk of poor Truffle's fur. Then the dynamic changed, and Truffle is bullying Pepper. My heart is breaking for my piggies; I just want them to be happy. I thought I was doing a good thing by bringing in Truffle. I could really use some advice here. Thank you.

Unfortunate if they’ve decided they don’t like each other then bathing won’t help. It sounds like the bond between Cookie and Pepper was already a little...’tense’. Adding a third piggy wouldn’t really help, and trips are also difficult as you can then have an odd one out so to speak. Older sows are also more difficult to bond.

When you introduced the pair to Truffle, the divider shouldn’t have been put in at all. Short as that time period was, removing it and letting Truffle into ‘their side’ meant Cookie probably saw it as invasion of her territory. And when you put Pepper with Truffle, did you rebond them or just put her in

Going forward you will have to keep her living next to Truffle and Pepper. Once bonded they can take up to two weeks to establish the hierarchy. I’m not as experienced with sow bondings but they’re generally hair pullers rather than full on fights. Have a read of the guides linked below and you can decide whether Truffle and Pepper will be okay together.
Bonds In Trouble
Sows: Behaviour and female health problems (including ovarian cysts)
Bonds In Trouble
Moody guinea pigs: Depression, Bullying, Aggression, Stress, Fear and Antisocial Behaviour

Thank you for the reply. Just to be clear, when the pair was introduced to Truffle, it was on neutral ground; it was not in the cage.

For now, you're saying that I should leave the cage split, with Cookie on one side and Pepper & Truffle together? Even though Truffle is now bullying Pepper? I may have enough grids to build a third cage. Should I do that if possible, or just let them sort out their problems even if it causes some discomfort for everyone?

Should we let them have floor time together? Or maybe lap time on separate laps?

Read the guides I’ve linked above and see where the behaviour is in terms of mild-severe dominance. How is Pepper acting?
Bullying is an extreme thing but I don’t think that’s what is going on here.

Once you've separated piggies you can’t have them together at all - for lap time or floor time.

The guides were very informative, and I feel better having read them. Thank you. I think I'm anthropomorphizing their behavior more than I'm aware.

Pepper is definitely displaying submissive behaviors, and it seems that Truffle's behavior is less bullying than it is her acclimating to the new environment. We're going to leave Cookie in her own apartment for a bit (if this is a permanent situation, I'll add a second level for her). It sounds like you think that Cookie should be alone -- whether by her preference or as a result of my mishandling of the situation -- permanently, is that right?
You must log in or register to reply here.
Top