Hey everyone, I just noticed today that my guinea pigs cyst looks infected or injured. I’m not sure what happened but she does have a companion who can get aggressive sometimes. She seems to be acting perfectly fine and the cyst is not cancerous. I’m wondering what I should to do help it or if it’s something else going on 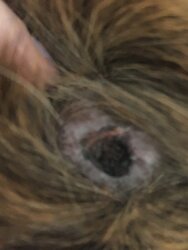 This looks quite nasty and definitely needs to be seen by a vet.
It will probably need some form of treatment and only a hands on examination by a vet can be sure to give you the proper treatment.

It looks like the cyst has burst and is potentially infected. Your piggy definitely needs to see a vet for the correct treatment

Please see a vet; you are dealing with a burst cyst with an infection risk.

Thanks for the replies! The wound got bigger and the scab got removed somehow, took her to the vet today and they drained it and put her on some antibiotics. Vet wants to avoid surgery as much as possible as guinea pigs don’t do well with anesthesia.

Brooke03 said:
Thanks for the replies! The wound got bigger and the scab got removed somehow, took her to the vet today and they drained it and put her on some antibiotics. Vet wants to avoid surgery as much as possible as guinea pigs don’t do well with anesthesia.
Click to expand...

It depends very much on how confident and practised your vet is with small animal operations. The operation success rate has massively improved over the last decade; but it very much depends on the two factors above mentioned.

I’m glad you took her to the vet. I hope the antibiotics help

This happened to one of my pigs, a cyst formed on her right hip, burst and then became infected. We tried keeping it open and ‘empty’ and clean as the vet was worried about surgery on a four year old pig. But she hated it so much and it was so stressful for all involved that I opted to have it surgically removed. Poor potato’s second surgery in four months! The same vet did the surgery as the last time and they were confident doing surgery on a dinky pig. She was totally fine and the cyst capsule turned out to be much larger than they thought - it would have been impossible to keep it clean. She was back to normal in a couple of days and the wound healed really fast once again.
Anaesthetic isn’t as high a risk as it used to be for piggies, though of course any anaesthetic carries risk for any animal, an experienced vet & team make all the difference (and loads of metacam for the recovery!)
Hope the antibiotics do the trick for your little flooff, but it’s not necessarily game over if they don’t.

Hope the antibiotics work quickly and the infection clears.
Holding you in my thoughts
You must log in or register to reply here.
Top