On 15th June 2015 Jemimah and her sister Keziah joined the family. Merab had recently been bereaved and was desperately in need of companionship. 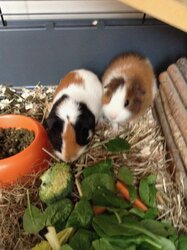 They bonded instantly- lulling me into the belief that bonding sows was a doddle!
Keziah was sleek and beautiful while Jemimah was cute and fuzzy and full of mischief.

Following the loss of Keziah we were joined by Priscilla and Phoebe.
I soon learned that bonding wasn’t such a doddle as Priscilla and Jemimah tussled for their place in the herd.

However after nearly two weeks of nipping, chasing and a bit of fur pulling they suddenly decided they were best friends, a strong bond that lasted all Jemimah’s life, although she and Merab remained close.

Jemimah grew into a beautiful teddy and a hefty piggy whose weight settled at around 1300g. She was sweet and fun. She had a lovely bond with all the herd. I expected some tussle between Jemimah and Priscilla when Merab died but nothing happened. They had obviously decided to share the role of top piggy.
Jemimah survived an emergency spay and surgery for a persistent abscess.
We moved house and the girls acquired a husboar in Micah.
Jemimah seemed to treat him as a little brother who occasionally needed putting in his place but mostly she treated him with love and patience.

She enjoyed a long distance romance with 2 chunky handsome boars, Bill and Ted.
A few weeks ago Jemimah was diagnosed with an inoperable abdominal mass and in the last week deteriorated fast until she slipped peacefully away on 15th June 202, exactly 5 years after arriving.
Now she can popcorn free with Bill as well as Merab and Keziah.
She was the cutest and loveliest teddy who leaves a huge hole in my heart

I’m so sorry for your loss

what a beautiful girl she was.

So sorry to hear this, sleep tight Jemimah

I’m so, so sorry about the loss of your beautiful girl, she was so special and I loved seeing her happy, gorgeous little face on your pictures with her pals having fun. Such a lovely tribute to her. Hope you’re ok xx
Hope you have fun at the bridge with Bill and the ladies Jemimah xx

What a fabulous tribute to your special girl. So lovely to hear of her bond with her changing cage mates. And of course, I was lucky enough to meet her and steal a snuggle with her chunky fuzzy butt. I’m so sorry that she passed so soon after diagnosis, but am also thankful that she didn’t suffer. There’s a bright star shining at the Rainbow Bridge x

What a beautiful tribute to Jemimah, and lovely to see photos of her past companions Keziah and beautiful floof Merab, so sad that Jemimah has gone over the rainbow bridge now but she's out of pain and passed peacefully and is now reunited with her old friends, and with handsome Bill... she was a very special fuzzy and opinionated lady, and as I was feeding my piggies beansprouts tonight I thought of Jemimah and her absolute outrage when I tried to feed them to her!
Thinking of you all at this sad time, she was a big personality and must have left a big fuzzy gap in your heart and your herd x

Oh what a beautiful tribute to your gorgeous fuzzy Jemimah. I am so sorry for your loss Heather, sending you big hugs, you will miss her so much x I think Bill will be holding her hand along with her lovely girlie companions. My Ted says he will miss all the love and kisses she sent him but one day he will join Bill and Jemimah and her friends over the bridge too

Till then Ted sends all his love and kisses

Thank you for your support.
I can begin to tell you how much it means to me

I'm so sorry to hear this, when I first joined the forum I loved seeing the long distance romance between Jemimah and Bill. It sounds as if she couldn't have wished for happier times in your care. Xx

RIP Jemimah - what a lovely girl. Her love letters were so much fun

Popcorn free at the Bridge

What a lovely tribute. Thank you for sharing this with us.

She seems to have had a wonderful life, surrounded by love (Piggie and Human)

I am so sorry for your loss! Jemimah was gorgeous and I have always had a very soft spot for her (but then I am rather biased!)
Jemimah couldn't have had a happier life and has despite everything lived to a very good age! What a bitter-sweet day for you.
M

It's so hard when we lose a loved pet, they are so much part of our lives, part of our family. She had such a good life with you and would have known how much you loved her. I feel so sad for you, and me and my piggies send our thoughts at this time. RIP beautiful piggie x

What a lovely tribute to a beautiful piggy. Holding you in my heart. Sleep tight little one.

So sorry you lost the beautiful Jemimah. I remember when I visited you and your piggies before you moved she nearly came home with me in my piggy napping bag! Popcorn free and have fun at The Bridge Jemimah!

What a lovely tribute to your beautiful fuzzy girl.

Sending you and the piggies lots of love and gentle hugs. xx

Sending you hugs on the loss of beautiful Jemimah. She's going to be missed by us all.
Run free over Rainbow Bridge sweet girl.

such lovely words about a sweet little girl. Popcorn free sweet Jemimah - you will be missed