You may remember about 6 weeks ago little Ralph came home with me!

He was neutered last week and did extremely well! I brought him home and popped him in the hospital cage to rest, I popped some veggies in and he started eating right away. It was a huge relief not having to worry about him eating. He's back to his normal self and on the mend and in a few weeks to be intoduced to his girlfriend bunny

His is still extremely scared of being touched and handled. But we are working on it! He likes having a run on my bed while I sit with him and the occasional headrub so the veggie bribes must be working

He has developed a very odd obsession with my curtains, he loves hiding in them and sniffing them.. Then scares himself when they move! Silly boy!

And some pictures of tonight's bonding time: 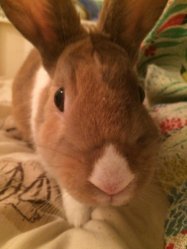 "She will never find me in here!"

Aww look at him, I'm not a huge bunny person but he's got me!

Galaxy&nibbles said:
Aww look at him, I'm not a huge bunny person but he's got me!
Click to expand...

Aww, he will be please to know that! I love having bunnies! They are so silly!

Aww that picture of him having a little wash melts my heart! He's so lovely