Looking after guinea pigs with limited or no mobility

Loss of mobility can happen out of the blue, from accident or a sudden onset illness and can be very traumatic, but it can also gradually creep up. Any bad limping where a guinea pig is unable to put weight on a leg, loss of mobility in one leg, in the back legs or total loss of mobility needs to be seen by a vet.

This guide here is looking at how quickly you need to see a vet in various scenarios and what you can do at home during recovery or as long term care.


I Why can guinea pigs stop moving around?

Please bring any guinea pigs with mobility problems or illness indoors. Keep in mind that company is still in many cases essential unless dominance behaviour is turning into longer term bullying. In most cases any change in leadership will sort itself out within a few days.

Bedding and cosies
Please change any bedding in the area that your guinea pig is sitting in constantly ideally 2-3 times daily to prevent it from lying in its own waste and to minimise the occurrence of resulting complications. This also goes for any loose bedding or cosies.

If your guinea pig is facing longer term mobility issues, look for vetbed bedding in pet shops or online. You usually find it in the dog section. Vetbed is the softest bedding available. Cut it into suitably large pieces that cover the area your guinea pig is living in.


Everything within reach
Make sure that your guinea pig has everything within easy reach if it is still slightly mobile and is eating on its own – especially hay. Place it in a shallow tray or a on a piece newspaper. Hay should still make over 80% of the food intake.

Also move the water bottle close by and low enough that a guinea pig with problems to use the back and struggling to lift their head (arthritis for example) can get to it easily. If that is too much, switch to offering water by syringe several times daily.


Warmth and stable conditions
Very ill and older/arthritic guinea pigs crave warmth.
A half-heated microwaveable snugglesafe is ideal if you exchange/re-heat it 2-3 times a day as it will be warm but not hot this way.
Please be careful to not overheat a guinea pig that cannot move away from a source of heat; there is the risk of burns!

Please also make sure that you keep any guinea pig with mobility issues as comfortable during hot weather. They are in a higher at risk category re. heat strokes/overheating and falling ill when their weakened immune is overloaded.
Hot Weather Management, Heat Strokes and Fly Strike

Weight monitoring and topping up feed
Please weigh any guinea pigs with mobility issues daily to check the hay/food intake. Weigh at the same time in the feeding cycle, i.e. first thing in the morning or before you serve any dinner. Please be aware that the more often you weigh, the more you are moving within a weight band of ca. 30-40g. A full bladder weighs around 10g and full meal can make a difference of 30-40g. That is what you have to factor in and minimise as much as possible. Weight - Monitoring and Management

If your guinea pig is still eating on its own but there is a gradual downwards trend in the weight, then you need to feed extra, whether that is recovery mush or a mix of more familiar pellets and recovery formula soaked in water; offering plain porridge oats can also help.

In the case of your guinea pig is not eating at all or eating only very little, you need to step in with full syringe feeding, depending on the weight loss. Complete Syringe Feeding Guide

Your first aim is always to stabilise the weight before you can think of building it up again if that is possible.

If longer term mobility is starting to impact on the gut, then your guinea pig may need further help. Please contact your vet and start a support thread on the forum.


Drinking
Getting to a bottle and drinking can be a problem for guinea pigs with no or very limited mobility. I find that offering water from a syringe to allow the piggy to drink from as much as it wants several times a day is often the most effective way to make sure that it gets all the water it wants.
Please do not just squirt water into the mouth; let your piggy drink the slow drizzle that comes out of your syringe and adjust the speed to how thirsty it is. Accept if it stops sooner than you would like to because it has had enough.

If you are absent for long stretches of the day, leave a piece of cucumber if your guinea pig is still eating on its own. This will provide edible fluid. A larger piece will stay cooler for longer in warm weather.

Guinea pigs with no or limited mobility can no longer wash and clean themselves, especially the back end. This is a task you will have to take over.


Daily health checks
What you need to check daily:


Potential secondary complications
There are some follow-on complications that can affect especially frailer and older guinea pigs. It is worth keeping an eye out for them during your daily health check:

Even without being able to walk, guinea pigs can still have an enormous zest and will to live. As long as they are interested in food and like to beg/sticking their head out, they have sufficient quality of life to keep them going.

There are however ways in which you can enrich their lives with social interaction and sensory experiences.

The illustrations in this chapter are from my then 7 years old Nerys, who ended up with slightly unequal back leg paralysis and near total loss of appetite due to a build up of fluid starting in the adrenal gland area and spreading down her body in 2016. It was touch and go with spoon feeding for several days but Nerys did eat enough by her own volition to keep going and eventually made a recovery although her gait remained rather wobbly. Here is a picture of her at the worst stage of the left sided fluid build-up.

Companionship
Having a companion is and remains the most important enrichment you can ever give any guinea pig. It is not just the constant stimulation and interaction, but also the sheer stress relief, comfort and moral support that comes with it.
If at all possible, please do not separate a bonded pair and allow their closest group friend to come with them. 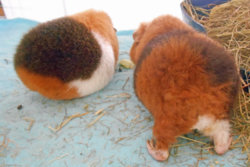 Nesta, who made a half-hearted attempt at taking over during Nerys' illness eating breakfast with her still wobbly and stiff-legged athritic friend during recovery. Her steadfast companionship during the darkest days was a major factor in Nerys' will to survive.

You have to brace for some inevitable dominance behaviour if the leader is the one affected. The hierarchy will have to change. In most cases dominance behaviour looks much rougher than it actually is and submission screaming from the under-pig is NOT from actual pain, but it is a very effective “Don’t be mean to me; I am not contesting your claim for superiority!”
This stage should be over in a few days and it is generally on the milder side in a well bonded pair and the new leader will soon start looking out for their companion.

Only separate if the dominance is going past the nipping and snatching the best bits and nicest cosy part well into actual bullying from a dysfunctional bond or if it continues on a high level well beyond a reasonable time span.


Enrichment ideas
Your guinea pig may not be able to move around as much, but there are still ways to keep it stimulated and interested in life!


Allowing your piggy as much as possible to do things and visit places it used to enjoy when still mobile can go a long way to keeping it happy, even if it is only for a short while.

Enrichment is important to keep your guinea pig’s interest in life and will to live going and to keep it happy for as long as possible and to add quality to its life in as many varied ways as possible.

I hope that these tips will help both you and your guinea pig to still have as much quality of life during recovery or while needing permanent care.

As long as a guinea pig with mobility issues is begging for food, it has enough quality and zest for life to keep going and be kept going.
You must log in or register to reply here.
Top