Hello, i have noticed that whenever one of my guinea pigs has grass (either in the cage or outdoors), there is always a large amount of staining under the chin, and even a little on the legs. The other doesn't stain at all. I felt this area prior to putting them briefly on the grass today and it was dry, and i dont notice staining from any other food (he has had red pepper etc)... it just seems to be after grass. Could it be he is drooling when having grass, is this normal, or could he have some sort of dental / mouth issue? He is eating everything normally btw.. lots of hay, drinking water, eating his veggies / forage, pooping ok, running around the cage as usual, being inquisitive etc. I am going to take them both to the vet as soon as i can in any case, for their first general check up. He didn't have any stains when i first got him (just over a week ago)... hence the feeling that he has developed some sort of mouth issue since he has been with me. Any advice / guidance would be much appreciated. thanks. 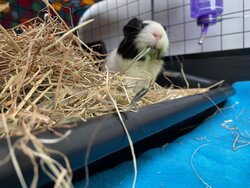 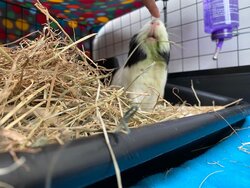 If he is eating normally and his weight is going up, then I wouldn’t think it is a problems and that he is just a messy eater - it’s not uncommon to see veg stains down chins!
Good you’re getting the vet to check then out though.

As long as his weight is good and his chin isn't perpetually wet, I wouldn't worry. My pigs get stained all the time... obviously I notice it more on the pigs with the white fur.

Hello - just an update after the vet visit today. He said that he checked Kylo's mouth and it looks like is holding on to food and some liquid in his mouth...I've never heard of this. He said that we need to get to the bottom of why he isnt swallowing it. As i've mentioned, he definitely is pooping ok.. so i know he is eating and passing things through the digestive tract, and he is eating all other food and hay and pellets and drinking water. vet recommended to take him off grass and veg for a week and then slowly re-introduce to see whether any one particular item might be causing him issues. I mostly noticing the staining when i feed him grass, but perhaps that's only because its the food that does have the most colour. i will also be daily weighing him to ensure that he is definitely gaining weight. For now, the chin feels dry to touch - so its not constant drooling. Just wondered if anyone else had come across this before? Could he have bitten his cheek and is holding stuff there by way of comfort?

Hello, just wanted to provide an update having been to the vets again and seen an exotic vet, turns out that his molars are slightly turned in, but that shouldn’t really be causing him too many issues because he is eating and maintaining weight , and that the main issue is that he actually has an ear infection - which maybe why he has had difficultly keeping food in his mouth or in front of him. He also started circling this Saturday and looking a little unstable. Vet has prescribed something for his ears now. So hopefully should
Get better soon. He also has lice which will need treating. Vet is trying to get hold of something called stronghold for them.

curlykrish said:
Hello, just wanted to provide an update having been to the vets again and seen an exotic vet, turns out that his molars are slightly turned in, but that shouldn’t really be causing him too many issues because he is eating and maintaining weight , and that the main issue is that he actually has an ear infection - which maybe why he has had difficultly keeping food in his mouth or in front of him. He also started circling this Saturday and looking a little unstable. Vet has prescribed something for his ears now. So hopefully should
Get better soon. He also has lice which will need treating. Vet is trying to get hold of something called stronghold for them.
Click to expand...

I hope his ear infection and lice clear up soon x

Kylo had his trip to the local exoitc vet today, and the lice infection has gone, and his ears are much better. Unfortunately there is definitely something wrong with his mouth as he is eating veggies in a very odd way, eating less hay (i have noticed he prefers to eat a hay cookie than actual loose hay), drooling and then obessively cleaning his mouth and chin after anything that he has eaten is wet. the Vet today prescribed Baytril. He also said all the skin around his neck looks scarred? I'm wondering whether he has also got some fungal skin infection now due to the drooling and constant cleaning of his face? I have been daily weighing him and he has been slowly but steadily loosing weight (which may also partly be due to having troubles with his cage mate Ren (on separate thread)) On the plus side, he is still pooping regularly, and they look normal, albeit a little smaller than when i first got him, and he is still interested in food. I gave him a few oats today and he wolfed them down. I have an appointment at Cat and Rabbit tomorrow with Simon/Kim - so hopefully they will be able to get to the bottom of what is going on. Feeling a little sad as i have only just got them and feel like he hasnt had a good run with me so far.

Hello. Just finished at Cat and Rabbit with Simon. Good news is that Kylo’s teeth and mouth are in good condition. Bad news is that he likely has some middle ear infection possibly causing some neurological issues with the face... and hence the drooling I pointed out at the start of the post. So I’ve got new anti biotics and anti inflammatory and will see how it goes. It may be that he always retains some form of imbalance / neurological issue even if the initial infection does get cleared out. Fingers crossed he makes a full recovery.

Glad you got a clear diagnosis and pathway forward for Kylo. Sending healing wheeks!

Glad that Cat &Rabbit have managed to give you a clearer idea of the problem. Fingers crossed the new treatment works for him.

Lots of love and wheeks to Kylo.

Hello all - just wanted to provide an update. Unfortunately Kylo didn't make it. I took him to a more local vet who is Guinea Pig savvy today as he looked like he was in pain (i took him to an emergency vet last night), She suspects that there was some sort of growth blocking his ability to swallow and also causing the neurological issues he was presenting with (the circling etc). I had a feeling the two might have been linked because from the beginning when i would touch his nose to get him to look up he would always do this at a slight slant to the left (and you can see it a bit in the photo at the start of the thread before things started to go downhill). Today i managed to only feed him 1ml, and his morning meds. After the morning vet trip, i brought him home to see if gut stimulating medicine would work plus the Loxicom he was on, but nothing made him feel better and he was just grunting with pain, so took him back to the vet early evening and they confirmed his body was shutting down and they couldnt get anything into him. he lost just under 100g compared to yesterday morning (when he had actually just started putting weight back on!). I'm just shocked how quickly things went downhill, but the vet was kind and advised that she felt the outcome would have been the same even if i had taken to him to them right from the start of all this, given his young age and how sick he was that something else must be going on. Thank you all for advise and support during our very short journey with Kylo.

I’m so sorry for your loss. You did the very best for Kylo that you could. Unfortunately we are sometimes blessed with them only a short time. But a time full of memories and happy moments nonetheless. Take care of yourself and his friend he’s left behind

You must log in or register to reply here.
Top