Terfel Has Joined His Three Cataract Wives At The Rainbow Bridge

Yesterday, my gentle Terfel has sadly followed his beloved cataract wives three weeks after his last one, Mali, has passed away so unexpectedly; her death has unfortunately tipped the delicate balance of his health. He has deteriorated quickly over the bank holiday. I am heart-broken.

I will never forget how a withdrawn Chapati (who I renamed Terfel, “Oak Prince”, for his ginger crown) instantly found his mojo and his voice when we introduced him to my Taffy and Tegyd in a bonding pen at RNGP Welfare Rugby in July 2011! He was an instant hit with the girls, even with rumbunctious Tegyd, who quickly mellowed with a new family of her own choice. Terfel had been rescued in very bad state from shed full of fighting boars and he always remained a lurker in the shadows who loved his special crannies.
@furryfriends Excellent Adventure Sanctuary incidentally had fostered him for the Rugby rescue until was ready for the snip. The Brackley boys rescue involved quite a number of then forum members in some way or other, so Terfel has always been a rather special forum piggy.

Looking after his sight-impaired/blind wives has become his life task, even though he would always leave his formidable ladies to confront any danger while hiding behind their ample bums. In December 2012 Terfel managed to integrate a very fear aggressive Mali with his considerable diplomatic talent during a two day bonding that was not for the faint-hearted. They became a very closely bonded foursome.

I am missing my “Terry-Chap” loads, as does his latest wife, Iola, who fell in love with him in January. Terfel was my cuddle boy, and my arms are feeling very empty after nearly four years.

Terfel with his distinctive crown

Terfel did have a gorgeous train

... but sadly not for very long, courtesy of Tegyd and Mali!

He got downright ecstatic over fresh grass

And went to great lengths (or is that depths?) to get it!

But he hated any fungal baths

And he would scramble on top of his wives to get away...

Before the arrival of five year old rogue Bryn, any sow that struggled with the Tribe ended up with Terfel for a few months

As Terfel slowly grew in confidence, he would do the rumblestrutting "boar haka" with Hywel and later also Bryn

So sorry he's gone, he sounded like a right character.

I'm so sorry that you have lost your lovely Terfel. Your tribute to him is very touching. He sounds like a prince among piggies. Popcorn free at the. Bridge Terfel.

So sorry for your loss. Beautiful tribute. x

In his best times, Terfel was quite a chunky boy

With his three cataract wives from front to back: Tegyd, Mali and Taffy

A lawn cuddle with me...

A rare opportunity to get a good picture of Terfel without him scampering for cover!

Snuggling up with his beloved girls on the lawn

One of my favourite pictures of Terfel 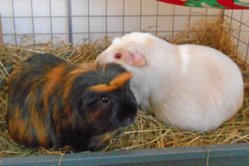 I love all my piggies dearly, but some build a bigger nest in my heart. Terfel's is one the biggest...

Some piggies dig a little deeper into your heart than others and leave an even bigger hole than others when they go. Big hugs to you @Wiebke.

So sorry for your loss. Such a special guinea, they do find a special place in your heart don't they.

I'm so sorry to hear this

My heart goes out to you x

I will never forget dear little Chapatti, who came to stay prior to his castrate op. He looked such an unloved little character with a patch of ringworm on his face. It has been lovely seeing him blossom into a much loved piggy after being adopted by @Wiebke and he certainly had a wonderful life from there on. Although he was renamed Terfel, I have always thought of him as Chapatti.

Sleep well Terfel! I really hope you saw your time with me, as a stepping stone to a lovely new life! Hugs for you Wiebke xx

So sorry for your loss x

Sorry for your loss Wiebke

Very sorry you have lost your gorgeous Terfel. x

Hugs and wheeks from us, RIP Terfel run free with your girls over the bridge

A touching tribute. So sorry for your loss. RIP Terfel.

So sorry for your loss. Sleep tight little one x

I'm so sorry for your loss. I know you will feel it deeply x

A beautiful tribute for a beautiful boy - I'm so sorry, a great big hug for you

So sorry for your loss, a much loved boy. Popcorn free terfel x