Thought I would finally add pictures of my c and c for my separated boar pair.

Both boys have a mixture of bath mats and fleece liners for bedding. I change out the tunnels and hideys for fleece tunnels when I change their fleece to wash. I do a full cage clean every four days but swap out the bath mats every couple of days if needed so it’s pretty easy to keep clean and I sweep them out twice a day.

My 3 girls cage. Trying new things out with the fleece blankets

Here is my homemade cage. The equivalent of 8x2.5 C&C grid size.

It looks a bit bare because currently there’s just one piggy living in it following a death. And current piggy never goes up the ramp, so I haven’t put anything up there! But he likes to lay under the ramp!
I make my own fleece liners because it would be far to expensive to get them made as they are so big. I have made some of my own cosy items too. But most I buy.
I do love my cage. A lot of love went into it. It was half the size originally and my grandad (sadly now passed away) helped us. Them me and my husband worked hard to extend it at a later date.

So here is my new cage design, I'm really pleased as I purchased the grids from Amazon for £35 and managed to create 2 spacious cages in order to separate the male from the females.(whom Previously had managed to jump over old cage and then into the females cage. I have also attached spare panels going all the way across the top to stop him jumping in untill he's nuteured (I have attached a copy of the cage I purchased)

As you can see the flowery pretty polar fleeces I purchased for £2.99 each from my local garden centre the cherry tree barn. Polar fleeces are really good for bedding and I have just put puppy pads underneath) I used three fleeces to cover the whole cage and just overlapped the extra material. I also put a different fleece over the top to create a sort of tent/hidey which they all love.
While I'm on the topic of the barn, I've recently discovered their favourite hay which they go absolutely mad for (more than anything else I've known! All of them zooming round the whole cage squeaking) I think it's called I unchopped meadow hay and it looks slightly looser than the other makes and it's £1.50! And it's a decent size bag! 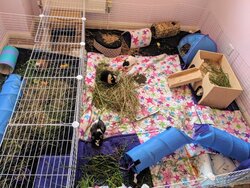 As you can see they have numerous hideys. If I had to recommend one I would recommend the long waterproof tunnels (rosewood activity tunnel for guinea pigs, not the rabbit one and it is 90cm long and was about £7) mine tend to run through these constantly and if you take the long tunnel out they don't tend to exercise much. They also have a hole in the middle as well which is handy for multiple guinea pigs. They don't tend to eat it, I just tried to cut it in half (which I would not recommend doing!) I'd recommend cleaning it every 3 days though something I tend to put off! You can also attach multiple tunnels together and the blue tent in the photo also attaches to these.

They love all their fleece items too but if I had to recommend a second item I would choose the hard straw/hay tunnel. It has multiple exits and the guinea pigs are ALWAYS nawing their teeth on it which I think really helps them. This was £4.99 from wilkos.

I'd say the other favourite is the upside down basket which was purchased from pets at home and also came with a cushion they love to sit on top of this while one of them sits underneath it's so funny to watch!
The guinea pig castle is great too as it has multiple exits and all 4 sows can fit in there comfortably (atm) this was I think £22 off etsy and eBay. 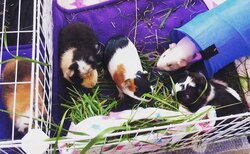 As you can see the main part of the cage is for four sows and the smaller section is for a single boar. Altogether the cage is 5 x 6 grids (210cm x 175cm) but of course 4 x5 currently for the sows and 2x5 for the single boar.

As you can see I had some spare grids left over so I made my own hay rack, (the triangular grid is much better practically!) The pigs love this and it helps keep the cage tidy!

would definitely recommend this cage! 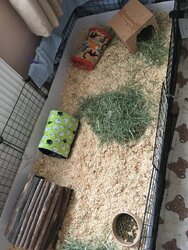 I have a C&C cage bought from C&C Cages.
I’ve created an L shape which is 5x2 on the long side with a 3x2 extension.
I use wood shavings as a base.
It’s easy to clean with the added advantage of being a pretty good workout to do a deep clean.
It was built for 4 piggies but now houses 3 - one of whom is a very lively boar.
You must log in or register to reply here.
Top