I don't often share photos so I thought an update on my current pigs with photos was in order. I'm not going to apologise for my face cos if you knew how little sleep I have had this past week thanks to a little person teething and needing a ginormous poop (which finally arrived at 1am this morning!) You'd be impressed at how well I look

Poppy - more hair than pig. She's still not a fan of being held and has become a lot more vocal since Daisy's passing 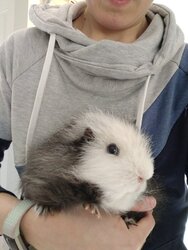 Lily - a special little piggy who used to scream the place down the second a human went near her, then she injured her eye and having to medicate several times a day stopped the screaming. She'll never be a cuddly pig but she tolerates a handling now.

Boris - he's really changed recently. I've never had a boar/sow combo where the male asserts dominance but he seems to be trying for it at the moment. Reminds me a bit of my first boar, Peter, in that he's a wimp and squeals everytime you clip a nail. You'd think it was the end of the world

Swissgreys said:
Gorgeous and I love the hoodie too - I think I might know that pattern

I'd be surprised... It's not handmade. It's an Amazon breastfeeding hoody. I have two which have saved me from having to get too cold this winter

You must log in or register to reply here.
Top