Ball On End Of Nipple And Swollen Testicles?

Weasley is still suffering his tummy problems but he is starting to have more good days than bad since stopping his meds and going on to his dry diet with minimal pellets, although he's been chewing the correx in protest of the pellet reduction!

I noticed a few days ago his nipple was a bit red but he's been itching and losing hair so myself and vet were assuming mites (treated with Ivermectin) and I put it down to that. His nipple is however now looking very strange. The picture is as clear as I could get so apologies for it not being too clear, it has a small lump about the size of a cotton bud tip dangling from it by a small strand of skin. It looks a bit like a bad skin tag you'd see on a human. He also won't sit still for me to clean out his anal sack, he's usually quite happy being upright and or flipped over but today he's very squirmy.

I did give it a gentle squeeze and it isn't releasing any fluid or anything. His testicles seem a bit larger and very pushed down and firm too compared to usual. I've read a bit about tumours and infections in the mammary glads but this doesnt seem to match what I've read about.

Anyone any ideas what it is? @Wiebke ?

Sorry, forgot to add the photo! 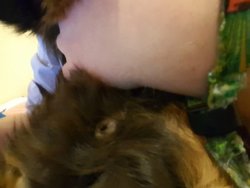 Please have it checked by a vet. It is impossible for me to guess from your picture.

Wiebke said:
Please have it checked by a vet. It is impossible for me to guess from your picture.
Click to expand...

I'm planning to call the vet first thing in the morning, I was just curious if you had any insight. Thanks anyway.