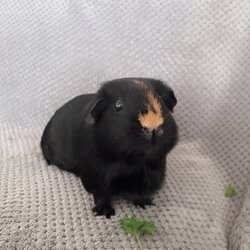 Our Tilda is a 3 year-old female guinea pig living in Finland. She has pain while urinating and pooping (only after urinating) and also has had blood in urine (not at present). The problems have persisted for several months now with a few intermittent symptom-free episodes. The symptoms also seem to be getting worse.

She has had three courses of antibiotics, the first two were sulfadiazine/trimethropin 50/16 mg/ml 0.3 ml twice a day for 10 days and the second course for 15 days.

The last antibiotic was enrofloxacin 50 mg/ml 0.25 ml twice a day, but we had to stop giving it after 7 days due to diarrhea. She is still, a month later, having somewhat soft (and big) poops and she hasn’t reached her normal weight. We have given her Science Selective recovery plus feed about twice a day for a month to help with the weight gain. She seems to eat completely normally, but struggles to gain weight. Healthy poop from other piggies has been given to her.

During the first vet visit in October an x-ray was taken, which revealed no stones.

She has also been given meloxicam 1.5 mg/ml 0.3 ml twice a day for some days during every antibiotic.

All the antibiotics (or the meloxicam) seemed to have helped for some weeks, especially the first course, but the symptoms have always returned. After the last antibiotic, which we had to to stop giving after 7 days, the symptoms stayed away only for two days.

We have tried giving bottled water, a low calcium diet and she also has had half a capsule of cystaid (cystease equivalent) a day for 22 days, but none have proven effective. We have had some troubles testing the low calcium diet though, since the gut problems restrict the amount of veggies we can offer.

We have seen three different vets, but none of them are specialized in guinea pigs. They seem to have three possible diagnoses: a stone, TI or ovarian cysts. With the first two diagnoses somewhat ruled out, our vet is inclined to the diagnosis of ovarian cyst, even though there are no other symptoms. Sludge or cystitis have not been suggested.
We really appreciate any help we can get! <3

I’m sorry your girl is unwell. It takes longer for them to gain back weight than it does to lose it. You just need to keep her on the healthy diet of plenty of hay, cup of veg and a tablespoon of pellets.

The likelihood of ovarian cysts does start around the age of 2. But the symptoms sound like something to do with the urinary system and not reproductive system.

What veg do you feed her?

Hopefully someone else will be along to help.

My 4 year old girl has been dealing with recurrent UTIs since this summer.

Buttercup did have sludge and crystals. She's on potassium citrate and hydrochlorothiazide for life now.

Some of her UTIs have been asymptomatic. They were rechecking for the crystals and saw the bacteria, even though she had no blood or pain.

Recently she had some ulceration on her vulva which cleared up with silver cream.

Vet said her anatomy was turned in a bit, which allowed more bacteria to enter.

Sorry I dont have more answers...right now we are hoping to stay off antibiotics for as long as possible

My guinea pig has been diagnosed with interstitial cystitis after ruling out bladder stones (it is seen more in guinea pigs that are easily stressed/nervous (I find my boy has flare ups when he has vet visits or a sudden change to his diet which we have now stopped changing/alternation and give him a consistent diet of just lettuce, cucumber, pepper, corriander and the odd mange tout.)

We also don’t give him any pellets as even the lowest calcium pellet has more calcium than any veg. My boy has two cystease tablets per day (one in the morning with 2ml of water) and the same in the evening. He has 0.2ml of dog metacam twice daily but that is upped to either 0.3ml or 0.4ml twice daily when he is having a bad episode. If you think it could be interstitial cystitis I would speak to your vet about upping the cystease (I’m pretty sure my vet said it was classed as a food supplement) so they can have two per day if needed.

I forgot to add that my guinea pig is also having a course of cartrophen injections, which is a fairly new treatment for guinea pigs that suffer with interstitial cystitis. Another thing that might be worth mentioning to your vet

Thank you very much for your kind replies.

Her daily diet includes a C-vitamin tablet, a tablespoon of Versele Laga pellets (https://www.versele-laga.com/en/gb/complete/products/complete-cavia) and, at present, only coriander and yellow bell pepper. She has previously eaten mainly romaine lettuce, cucumber, red/yellow bell pepper, celery and sometimes carrot and parsley. Thanks for the suggestion about reducing pellets, we will certainly try it out. However, it is not easy when she struggles to maintain her weight.

We will talk with the vet about the suggested medications. She has gotten dog metacam during the antibiotics, but not anymore.

Is there anything we could ask our vet to confirm, or rule out, certain diagnoses? At the moment we have no idea if it is cystitis, a cyst, sludge, UTI, kidney failure or some other.

We have a vet appointment for Monday and we would really need help with the last question on my last post above. I fear that the vet will have no idea what do next (besides the ovarian cyst surgery), so it would really help, if we could suggest something to help ruling out some diagnoses. Could blood or urine tests reveal anything?
You must log in or register to reply here.
Top