So in the neverending saga of Weasley, he was looking better apart from the gas on Monday afternoon, so the vet started him on fibreplex to try and flush him out, upped his emeprid to 3 times a day and suggested putting him back in to a larger cage to see if he got more exercise. Last night his poops were getting quite soft again and hus stomache was VERY noisy so I stopped his veg overnight. He was very gassy, and it was really quite a strong smell, even worse than usual. He didn't poop at all between about 2am when I went to bed and when I left for work at 8am but again based on smell had passed a fair bit of gas. I popped home on my break to check on him around 11am and he had dropped a few small hard poops and one very large sticky clump. Came back at lunch and found him sitting in a pile of thick toothpaste-esque poop which was slowly pouring out of him, but looking much less gassy. Cleaned him up and went back to work for the afternoon, came back to find more sludge, and have pulled out some more stucky clumps of poop and a few more normal looking ones of various consistencey ranging from hollow and hard to soft and blue tack like. The last few he has passed have been still quite sticky but a nicer colour/size/shape.

I've uploaded photos of the various types he's passed, and know for a fact that at least 3 of the 5 clumpy ones have come out as they are since I've had to manually remove them, so they haven't just been sat on and squished together.

He is still eating plenty, has drunk slightly less assumedly due to his discomort and the bottle being slightly further away in the new cage (now moved closer). He is also now occasionally hopping (once in a blue moon, so not a motion/injury issue far as I can tell) but he's done this before when having stomache issues and it is few and far between so I'm again just putting this down to discomfort as the vet did last time, as she gave him a full check ober again on Monday and said there were no signs of injury to be causing it. He has been making occasional muttering/squeaking sounds before passing some of the larger clumpy ones or very soft ones. His anus is also very tight at the moment and I'm struggling to get it to open up fully to give it a good clean as he is a wiggler.

Is this just the fibreplex clearing him out or is he possibly impacted? I'm wary of continuing the extra fibre in case of a blockage but he is still passing poop. The specialist I've been seeing isn't back in until next Monday and the other vets aren't sure what to do with him and just sent him home and said to top him up with extra fluids last time I took him in with this so I'd rather not pay £30 to be told the same thing if it's not an emergency. If it is concerning I'll phone he next closest specialist and try to get him in with them asap but again, if not urgent would rather save him the stress of a 2 hour round bus trip.

Please take Weasley off any fresh veg as soon as he is getting gassy/soft poos again and be very careful in reintroducing them only slowly, one new one per meal 1-2 days after his tummy and poos are normal again.

If necessary give him some gripe water if you think his tummy is rather rumbly and could get gassy.

Bloat/a tender tummy usually lasts for weeks or even months, so it is often a matter of being alert and reacting promptly to keep things under control as much as possible. He is on the right meds.

Top him off with syringe feed or grain-free mushed pellets or let him eat that from a bowl if he still has got his appetite.
Here is my own bloaty gent maelog enjoying himself while his sow-wives are tucking into their fresh veg. 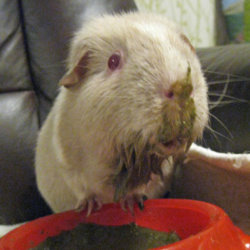 Thanks Weibke, just so long as its not an urgent thing I'll continue to monitor closely. He has had no veg since the mushy poops/gassyness returned yesterday evening, and I've also ordered some of the grain free pellets as you suggested last time so will start introducing them as soon as they arrive and try to wean him off the excel. He is still eating plenty and with gusto, and has put on another 10g in weight since yesterday so I think there is plenty going in, just what's coming out is off. I have some crtitcal care in the cupboard just in case though and I will top him up with syringes of water if he doesn't pick up with the drinking again.

Maelog looks quite the dashing little chap, and seems to be enjoying his bowl of pellet mush so hopefully Weasley will follow suit!

I agree with Wiebke. It's not an emergency so save your funds. It's just a continuation of the management of his bloat. It can feel like one step forward and 2 backwards I'm afraid! You just have to be constantly monitoring for any changes and as soon as they get gassy/ pass soft poos again you have to stop the greens and return to the dry stuff (hay/pellets) again. My Connie was the same.
Woodwards gripe water is good for helping disperse gas. Safe too.

It definitely seems so Vicki! He'd been enjoying a few days or normality after his antibiotics being stopped, hopefully he levels out again soon!

Is the gripe water safe to give with all his other meds (zantac, emeprid, meloxaid and fibreplex)? His gassyness has definitely dropped since last night but I'll pick some up for the future tonight.

Gripe water is safe to use in combination with those. You can get it in the baby aisle at most supermarkets. Piggies love the taste of it, too.

Just checking again, he's had the toothpaste-like poop again all night by the looks of things and is now extremely swollen round his anus. He also keeps having little twitchy jerks a bit like popcorning but without the squeaks when he passess gas, although he is eating some of the toothpasty stuff so assumedly it can't be that bad?

Have just weighed him and he is still in his normal weight range (was 1.35 last night now down to 1.32), is still eating and drinking plenty and if anything seems more bright/active than he has been in the last few weeks, lots of wandering round the cage and less hopping than there was last night and passing a lot of gas by the smell/sounds of it.