Seeking Advice From Owners With Just One Pig

I would love some tips and advice from other owners who own just one pig. Honestly any responses would be greatly appreciated!

Nearly two years ago, I bought two of the most lovely guinea pigs anyone could wish for. Dalek Kaan (Hopefully there are some Doctor Who fans here), the black and brown funky haired chappy, and Lili, the smooth coated white and ginger nut. Long story short, within the first 18 months there were an array of medical problems and in the end my gorgeous Dalek had to be put down.

Basically, now it's just me and Lili. She's a very happy pig. She was a bit depressed after Dalek passed, however after a week she was back to squeaking, pop corning and chirping. After lots of deliberation, I don't think buying a second new pig is a good idea. The two main things that I'm worried about is that I buy a pig, which I think is female, and it turns out to be male again; I'm also worried that I may buy a pig - new piggy and Lili don't get on, then I'm left with two separate pigs. Furthermore, the above health problems costed a huge amount of money all in all, and I currently couldn't afford that again. In the future I will buy another pig, but for the foreseeable future I am not.

I'm lucky enough to be able to spend a large amount of time with my girl. However, I would hugely appreciate anyone else's stories, tips, advice or just interesting bits and bobs about their alone piggy. Thank you so much!

I know you said at this moment and time a new pig is out of the question. I did however want to make you aware there are rescues who do piggy dating, they are also very experienced in sexing guinea pigs which would remove both your concerns.

Ultimately your piggie will be much happier with a cage mate of her own.
Human company can only go so far.

If you let us know where you are based someone might be able to suggest a local rescue you could work with to find the ideal companion.
A rescue will health check and properly sex a new piggie to make sure there are no underlying issues or mistakes.
Many places will also allow you to bring your girl in and help choose her own companion.

Oh, and your piggies are very beautiful and obviously well cared for.
So sorry to hear about Dalek. He was obviously a much loved boy by both you and Lil.

With all of the above, I adopted my Oakley as a single boar not to long back and although he loved his human interaction there's only so much I could do really. He didn't move around much and having 3 other pairs of boars I just knew his behaviour wasn't right! So we took him boar dating to the lovely @pig in the city and met Ollie

oakleys behaviour was an instant change! I honestly did not see the problem before this forum and keeping piggies myself of just having one piggy but oh my word I do now! There is just an interaction between piggies that we humans just can't provide no matter how hard we try.

I agree with @Swissgreys add your location and we can point you towards your nearest rescue who will have been health checked, and sexed Properly they can also match you up to a piggy

I know it's probably not the answer you were hoping for as you said you do not want a piggy mate just yet, but honestly you will be amazed in the difference of your piggy. As for vet bills I'm pretty sure most vets do a payment scheme should you need it

Ps your piggy is so cute 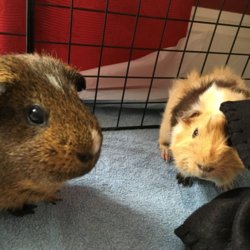 Oakley & Ollie up to no good on their cage clean out!

With the other posters. If you add your location we can point you in the direction of a reputable rescue who will do piggy dating and match your lovely lonely girl with either a neutered boar or a sow with whom she is compatible. Piggies really do need other piggies for company.

Hi, I'm currently looking for a companion for my 18 month old boar and my local rescue has been extremely helpful. I would recommend a rescue centre, they will help you find a suitable companion and as I have learned its much easier to find a companion for a sow, so in that respect, you are quite lucky. Hope you find Lili a friend.
G

Would focus on enrichment, and continue to provide daily human companionship/interaction.