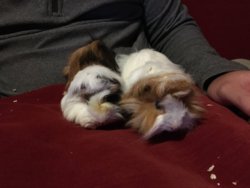 Hi, I bought 2 beautiful little peruvian sisters just over 2 weeks ago so they must be about 8/9 weeks old now. Built a new cage for them to come home too out of wood which gave them plenty room to roam! They both seemed to settle in fine, still a bit nervous but we handle them plenty so hopefully will get used to us soon enough.
My only promlem now is that I started to notice a few miniscule white bugs crawling on anything that was on the floor or near their cage (theyre inside piggies in second living room with us). The first few times I didnt think much of it but when they kept appearing I started wandering. I've taken them out and put them into spare cages until I got the room fully cleaned and when I took them out on Saturday I decided I'd give them a good comb and my partner said that he could see these miniscule bugs crawling in their fur. I couldn't see anything but bugs in general freak me out! I checked the other room yesterday and can no longer see any bugs crawling on anything so I'm wandering if its from the piggies?
But does anyone know what it could be or where its came from? I wouldve thought if it was guinea pig mites or lice then they would only live on the pigs fur not crawling around on other things in the room? I've been using wood shavings for bedding but have been using fleecey blankets and towels since discovering the mites as I was scared they could be coming from the wood shavings?
I bought that Beaphar anti parasite spot on from pets at home but since read that its more of a preventative rather then a cure. Am I best to take them to the vet to be sure or has anyone got any suggestions or anything that they have used? I dont really want to traumatise them conpletely by heading down to the vet if I can avoid it! I hear theres a lice shampoo thats really good for them?
Any help would be much appreciated!

Also, the little tri coloured piggy was in a bit of a fight with an older piggy before I got her home and lost a little bit of fur on the top of her nose (hense the idodine splodge) it hasnt bothered her at all and is starting to grow back but I'm guessing that wouldnt have affected anything? and any cure that I use wont aggrivate the healing process will it?

Tagging in @Wiebke and @helen105281 for you. Keep an eye on the thread

In answer to your question it is not Mites. Mites are not visible. Some sort of lice. Whereabouts are you based. A vet will be able to advise on he best course of treatment but Wiebke and Helen may be able to suggest something too. I would suspect they have come from the hay or bedding.

Going from your description of White things it does sound like Running Lice which can be easily treated.

Okay! I'm up in Aberdeenshire (North East Scotland) it will maybe have to be a trip to the vets then. I thought it probably came in with their bedding/hay but I wasn't sure because they were on other things in the room (other then the cage)? I did read that these types of things just instantly multipy if not put under control

I think the vets is the best bet but you can bath with a product like Lice n Easy from Gorgeous guineas. The vet will likely treat with Ivermectin though so don't bath within 48 hours of any treatment from the vets. I would throw out your hay and any infected bedding and start again.